Play Snow Wild and the 7 features

I didn't have to play Snow Wild and The 7 Features to know what it's about. Obviously, the title is inviting enough to make you want to find out what the Red Tiger tykes have been up to for this game. It took me zero seconds to decide and off I went into the alternative take on the famed fairytale.

For starters, the game has a maximum win potential of more than 2000x your bet, which is a decent amount for Red Tiger games released in 2017. Getting near that nice lump sum is possible by getting on with these Rock and Roll dwarves who can perform a whole manner of antics that can nudge the game to pay up.

I enjoyed the gameplay and the features in what I found to be a fun, dynamic game. The payout frequency is consistent enough and allows you to experience the features and the improved odds for sizable wins that may come your way. The reel set consists of three rows and five reels but I would have really preferred 25 instead of 20 paylines.

Nevertheless, Snow Wild and The 7 Features is one of the better games by Red Tiger Gaming from that period and slot players who are fans of feature-filled games will definitely find this specimen to be engaging and more than playable.

So what I really like about the theme is the comical twist the designers have given to the Snow White story. Instead of goody-good dwarves who earn their bread by mining, this loony outfit is all about partying hard. This element of the theme can be seen all over the design. The dwarves are named and dressed like hard rockers, the mug of beer has the horns hand gesture and the background consists of tiny chairs and big electric guitars.

The premise settled well with me and I didn't mind the periodic lulls in the random number generator. I mean, despite the high variance level, getting one of the features to trigger doesn't take an incredibly large number of spins. Payouts and even close-calls are made known by electrifying animation and a moving soundtrack. Needless to say, I've enjoyed Snow White and the 7 Features plenty of times and I'm not going to forget to pay this hard rock hovel another visit.

Three extra symbols can be found on the reel set. There are two wild symbols and both can substitute for any of the standard paying symbols. The bonus symbol is represented by a round symbol that's been label the Lucky Wheel and as per the usual, you need three of these symbols to spin the wheel of rockin' dwarves.

In my opinion, the best feature on the wheel is the one that belongs to Snow Wild. If the wedge stops on her field, the pretty rocker chick can invite more than one feature to trigger on that turn, which increases by a lot your chances for a big win. I've won this feature only once, however, but it's been worth the wait.

So here is the ‘catch’ about Snow Wild and the 7 Features on this note. The Lucky Wheel is the only feature of the game, even though it can lead to seven different features, which is to say there aren’t any reel modifiers and multipliers in the base game and I am perfectly fine with that.

The payout structure doesn’t stand apart compared to other online slots. I’d say the values are average and this needs to be viewed in light of the multiple features.

The high-paying picture symbols that are represented by the apple, the pint of beer, the bag of coins and the two wilds can land you between 12x and 500x your payline stake. There are some decent amounts in this category but again, Snow Wild and the 7 Features is all about the, well, seven features.

There hasn’t been anything about the game that I didn’t like and I think the gameplay is quite entertaining. That max potential of 2,000x your bet? Totally possible if Snow Wild gives three of the best features a kiss, but you can land a big win even by getting any of the seven crazy features.

Play Snow Wild and the 7 features for free

Browse casinos with Snow Wild and the 7 features and other slots from Red Tiger. Create an account and try the game for free before making a deposit.

You can play Snow Wild and the 7 features in English, Finnish, Swedish, German and 18 other languages. 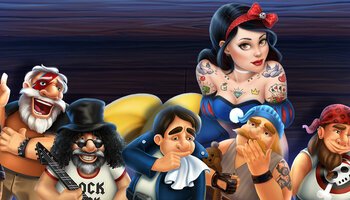