Set deep within a South American jungle, March 2020’s Solar Temple release from Playson is an Aztec-inspired slot outing - exotic beats included. Served sunny side up, Solar Temple is a slot the players would be advised to play armed with factor 50.

Shades of Light and Dark

Solar Temple is an in-your-face slot - all explosive sunbeams, scantily clad women and buoyant animations. Set within the verdant Aztec jungle, the graphics here are quite the sight to behold with decent attention to detail that renders nicely on both mobile and desktop.

Given the adventure and exoticism that lends itself so well to slot games, Aztec-themed slots have always flown pretty quickly off the shelves. Titles such as Beat the Beast from Thunderkick, Temple Stacks courtesy of Yggdrasil or Ecuador Gold from Elk to name but a few are a testament to the intense popularity of Aztec slots.

But what does Solar Temple bring to the slot genre? With below-average graphics and what smacks of a slight lack of visual insight, it’s going to take more than a massive burning star to lift this slot to Aztec deity status. It’s time to call for backup in feature form.

Features of the Aztec

Much like the carved Aztec statues of old, Solar Temple has plenty of features. From Flaming Wilds to Multipliers to Free Spins, there’s enough here to liven up the gameplay a touch.

With spins grouped into 10-spin chunks, if the stars are aligned, you’ll be enjoying the following features:

Trying saying that five times fast. A symbol of Aztec worship, here the sun is the star of the Flaming Frames feature, natch. Land a burning sun symbol and marvel as it explodes, creating a Flaming Frame. On the 10th spin, every Flaming Frame converts to a wild.

Land a sun symbol in the place of an existing Flaming Frame and you’re looking at increasing your multiplier by 1, cashing in on the 10th spin of the solar cycle. All multipliers reset to 1x after every 10th spin, living to shine another day.

The Aztecs used cocoa beans as currency: fact. While attempting to stuff fermented seeds into your USB drive to fund your account is very much embracing the game’s theme, it’s probably not advised.

Aside from the fact that this slot takes its name from a cult, there’s not a huge amount of enthusiasm I could muster for the game. While the graphics aren’t bad, they really don’t match up to any other Aztec-themed slot. The gameplay isn’t too shoddy - enough to keep me interested but nothing of note to write home about.

While playing slots can sometimes feel relentless, the grouping of spins into blocks of 10 is a neat way of punctuating the game and increasing player engagement.

Compared to competing slots in the already crowded Aztec section, Solar Temple is a decidedly lacking game, not burning boldly as the name would suggest but more smouldering quietly.

Browse casinos with Solar Temple and other slots from Playson. Create an account and try the game for free before making a deposit.

You can play Solar Temple in English, Finnish, Swedish, German and 18 other languages. 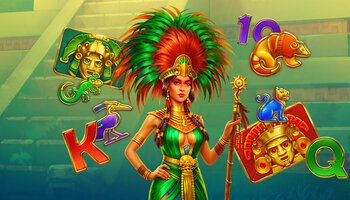