Sonic Reels is a slot that takes the experience of playing a game and combines it with the joy of listening to music. Players will be entertained by both a sturdy gameplay experience with free spins, re-spins and multipliers while enjoying some special songs.

This slot was developed by studio Wazdan and released in 2020. The graphics aren’t as impressive as those in games released by other developers, unfortunately. There are a lot of standard symbols ranging from BAR and Sevens to a collection of different fruits. They are all originally drawn for this game, giving them somewhat of a fresh look but unfortunately, it’s nothing I would consider remarkable.

Players will be playing on a 6-reel, 3-row playing field with 729 paylines thanks to the consecutive reels mechanic. When playing the game, you can only see two speakers on either side of the playing field, and indistinct shapes and colours filling the rest of the background. The symbols used to fill the reels are not very original but they do look different enough to make it easy to spot wins.

A slot with a name referencing its sound design obviously has to do something special with the music. I wouldn’t call the tracks playing while the slot is going to be very special but they do sound acceptable. Most of the time we can hear a rather chill techno song during the base game. When triggering the free spins mode, the song picks up a bit and adds to the energy. There are actually numerous tracks that can play while the game continues.

Sonic Reels doesn’t make it a secret what it draws inspiration from, doing nothing to hide the different fruit machine symbols. There aren’t even any clever interpretations of these familiar symbols that might provide some extra creativity. They look fine but aren’t animated except for the Wild symbol, which also makes for a rather static experience.

When it comes to getting a win, the symbols involved will move slightly before resetting to their usual shape. It will also project the total coin win on the screen for a moment. Activating any of the special features will slightly adjust the playing field, mostly by expanding the size of the speakers on either side of the playing field.

Getting a win is not too hard, but getting a bigger win is tricky. The game has Medium Volatility which puts the slot in a balance between quantity and quality of the wins. Players can adjust their bets to deal with this, picking one between £0.20 and £100 per spin. There is a max. win of 5,400x your bet which is about average for high volatility slots and a bit above the average for those games with medium volatility.

Sonic Reels has a selection of features that don’t really mesh with the classic fruit machine vibe it’s giving off. Where the symbols are all very standard and uninspired, the features play a little more with how they have been established in other slots. That doesn’t mean you will be blown away by their creativity, but they don’t all behave quite as you’d expect them to.

First, a quick overview of the features:

The biggest departure from the standard gameplay is the left and right speakers. These require the player to get 5 appropriately coloured speakers on the screen in order for them to activate. The trackers keep track of the symbols collected during the entire gameplay mode, and it is not needed to get all 5 symbols on the same screen.

Once one of the speakers has the needed 5 symbols they activate. The left-sided speaker offers fewer re-spins but has a multiplier associated with it. The right-sided speaker has more re-spins but no multiplier. In my experience, both can be part of a big win but they are still rare even when this feature is enabled.

Sonic Reels feels like a very rudimentary slot in most ways. The slightly larger playing field never really impacts the gameplay in any meaningful way as even six-of-a-kind wins are rewarded very poorly. Players that enjoy classic fruit machine looks will get something out of this game.

The gameplay is okay but did not feel like it was very fitting to the setting. While the appearance of the game seems to relish the classic look, the features are more modern. Then again, they are familiar to most players and won’t require much introduction. The only expectation is the re-spin functionality, but even that points itself out during play.

I found the slot to be rather lacking in appearance and creativity but as a standard slot, it functions fine. Players who enjoy a nice comfortable slot that doesn’t require a lot of thinking will get what they want out of this. For power players or people looking for something new, this might not be the best fit.

Browse casinos with Sonic Reels and other slots from Wazdan. Create an account and try the game for free before making a deposit.

You can play Sonic Reels in English, Finnish, Swedish, German and 16 other languages. 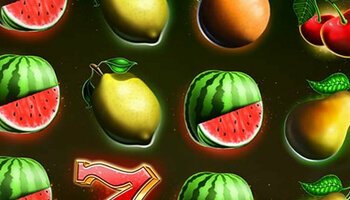