Space Wars takes place in the dark depths of space where different types of aliens fight amongst reels and re-spins!

While Space Wars is getting older, originally released by NetEnt in 2013, it still keeps up pretty well with the newer slots. For one all the graphics are in 3D and even though there are other slots that look prettier, it makes the game look a lot more modern. Couple that with the large number of animations and there’s always something to look at.

With its 5-reel, 3-row playing field and 40 paylines, the game sticks pretty closely to the standard slot layout. The game is filled with different aliens that make up the symbols, while the background shows us being deep in outer space, surrounded by asteroids and alien planets.

Science fiction is, of course, a popular topic for slots. One that jumps to mind is Incinerator by Yggdrasil, where you handle a high-tech incinerator on a trash planet. Meanwhile, Wazdan’s Space Spins slot removes the aliens but keeps the deep space to give you a different kind of otherworldly experience!

Space Wars added a suitably alien soundtrack to the game, which stays in the background during the normal spins but kicks up when you get a win. They’re mostly sound effects like blasters and laser sounds. I thought that was a pretty fun idea but it does keep things pretty quiet while the reels are spinning.

All symbols in Space Wars are uniquely made for this slot. No card suits or anything, they’re mostly different types of aliens. I thought they were pretty distinct from each other except two which looked like a big and small version of the same alien. It can be a little disappointing when you think you have a win but they’re actually different symbols.

The symbols are lightly animated when they’re part of a winning payline with different poses but no real movement. If you get a win, you’ll see the aliens get cloned in the pod on the right before a re-spin is triggered. If you get another win that way, it will play a real animation, one for each alien! I thought that showed that NetEnt is going above and beyond.

Space Wars keeps things pretty simple when it comes to its features. There are no Free Spins and there is no bonus game, everything takes place on the playing field. The few features it does include are all familiar to even the most casual players. Still, I don’t think those are bad. In fact, it keeps the experience quite light and it only took me a minute to get into the game.

Sweet and simple if you ask me. The game’s Medium Volatility shows while playing since a large number of symbols means that it’s quite difficult to get a winning payline. It’s possible to get a max. win of 1,000x your bet, which can be a rather big win considering the ability to choose a bet between £0.40 and £200 per spin.

The Re-spins were the biggest draw for me. Every time I got a win, the clone pod on the right would fill up and automatically re-spin the reels. It seemed as if that would facilitate a second win. Getting a second win would not trigger another re-spin, unfortunately.

Space Wars has kept up well with newer slots despite its age. The 3D graphics are crisp and look good, even though they are only lightly animated. The sound effects are what you’d expect from a sci-fi slot without becoming overbearing.

The small number of features means that the slot stays very close to the classic game experience most people prefer. The re-spins are really the only change to the base game I would consider worthy of mention.

If you’re a fan of basic slots set in exotic locations, Space Wars delivers exactly that. I liked it without being blown away by it. Just a nice way to spend a while watching the reels and seeing the different aliens fight it out!

Browse casinos with Space Wars and other slots from NetEnt. Create an account and try the game for free before making a deposit.

You can play Space Wars in English, Finnish, Swedish, German and 20 other languages. 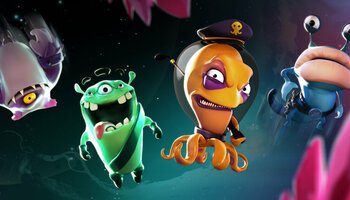