Spicy Meatballs Megaways does exactly what it says in the title. Players can spin the reels on this megaways slot while the necessary ingredients for a spicy meatball appear on the screen. With the inclusion of free spins and cascading reels, something else might drop on your plate too.

The slot was developed by Big Time Gaming and released in 2021. A lot of the symbols on the playing field will look familiar, as in my experience this developer reuses the low-paying symbols in almost all their games. Fortunately, the rest of its appearance is a lot more original. The game features 6 reels with each of them a random number of rows per spin.

In total, players can get anywhere from 64 to 117,649 paylines on the screen. All of this happens in what appears to be a kitchen, with the stove framing the reels. On top, we can see 4 pots that are cooking the meatballs on fire, each with a multiplier. In the background, there are familiar spices and cooking pans hanging off the wall. The rest of the interface is simple but effective.

Some special mention should go to the sound design. The music we hear is all very traditionally Italian-sounding. The way it's sped up and played on an electronic keyboard makes it sounds quite funny. In the background, we also hear some familiar kitchen sounds such as rattling pans and boiling water. All in all, a good way to set the mood and the setting.

Spicy Meatballs Megaways features a standard selection of symbols. They can be divided into two groups, low-paying and high-paying symbols. As I mentioned before, the low-paying symbols are card letters that are designed exactly the same as in other slots. Fortunately, I found the high-paying symbols to be a lot more original. Most of these are different types of vegetables one might eat in combination with their spicy meatballs.

Players can count on a slot with High Volatility that results in rather spaced out wins. You can expect to get a normal win here and there but those won’t pay out too much. The biggest reason why is because the slot depends on the cascading reels and the multipliers. It means that a regular win without either of those will just be worth very little. With an RTP of 96.57%, the slot does offer slightly better returns than similar games.

It’s possible for a player to change their risk somewhat by augmenting their bets. They can pick a bet between £0.10 and £20 per spin. The higher the bet the bigger the return, but obviously also a bigger drain on your funds. If you stay with small bets your funds will last longer but the wins won’t be quite as impressive. Either way, the maximum win in this slot is 55,210x your bet.

Spicy Meatballs Megaways includes some standard megaways features that are usually included in this type of game. There is a slight variation when it comes to the freespins mode, as it doesn’t require special symbols but only a consecutive number of wins during a single spin.

The majority of the game will take place on the main screen. Even though the free spins mode doesn’t require any special symbols, I found that getting the required 5 consecutive wins to be almost impossible. During my time playing, it only happened a handful of times. That said, once it did trigger it was very lucrative and netted me a sizable win. I would almost be inclined to advise players to play until they hit the free spins mode and if it gets them above their starting funds to cash out.

I found the gameplay itself to be quite compelling. The Meatball Wilds can randomly drop down whenever there is a win or a reaction. Even so, since the Meatball starts as a 1x multiplier it almost never helped create bigger wins.

Spicy Meatballs Megaways shows me that Big Time Gaming is starting to develop their own style. Even though they still recycle some elements of their presentation, they also start to add more unique elements. The idea of a kitchen where you cook the meatballs is executed well.

Gameplay-wise, it’s a lot more standard. The megaways feature continues to grow in popularity so it makes sense that the developer hones in on this. Nonetheless, the features that are built-in around it are perhaps a bit too strict.

I found getting into the free spins mode almost impossible, but once it did happen it was very beneficial. It’s up to the reader how much enjoyment they get out of the base game. If you are only playing for the free spins, it might not be worth it. Otherwise, it can be a very enjoyable experience.

Browse casinos with Spicy Meatballs Megaways™ and other slots from Big Time Gaming. Create an account and try the game for free before making a deposit.

You can play Spicy Meatballs Megaways™ in English, Swedish 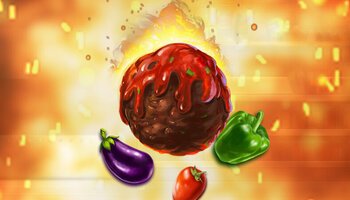