Spin Town takes place in a typical English town, overlooking a busy zebra crossing as the streets are filled with all sorts of common items fallen on the ground.

Developed by Red Tiger and released in 2018, Spin Town takes the idea of finding a game anywhere to a whole new level. Here, we are overlooking a busy zebra crossing as the 5-reel, 4-row playing field with a total of 40 paylines. The reels are filled with items we might see someone carry with them or fall out of their pockets. Things like keys, wallets and motorcycle helmets.

The game reinforces the idea of a real-life crossing by implementing a stoplight system. Wilds are placed on either side of the crossing, standing on the sidewalk until the light turns green. Then, the Wilds literally walk from one side of the screen to the other. Other special features occur in the shape of special events like Guardsmen marching across or a football rolling across the crossing!

I thought this was an incredibly fun and inventive idea, enforced by the very pretty graphics. All of the pedestrians that act as Wilds and cross the street have their own personality, which adds to the idea of it being a real street. The only thing missing are cars driving past.

The symbols are drawn with a lot of detail, although the low-paying symbols are simple card letters. Luckily, this is offset by the large assortment of other symbols that are all unique and inventive.

The game lists itself as a Low Volatility slot and although it did grant wins semi-regularly these were often too small to really help compensate for the spending. This meant that there was still a definite drain of my funds happening as I played, which doesn’t really fit my idea of low volatility. There were also definite dry-spells where a dozen or so spins yielded zero wins. In my experience, medium volatility would fit the slot better.

All of the features in Spin Town are integrated into the Wilds, as they act as different types of characters that react to crossing the street in different ways. Instead of discussing them as different features, I’ll list them as the type of Wilds they are:

The last 3 Wilds only appear when they’re triggered by getting the appropriate symbols on the screen. This was extremely difficult during my time playing and I barely saw the symbols appear at all, let alone 3 at the same time. Once they did trigger they were about as useful as the other symbols and it very much depended on the regular symbols. The Wild symbols are simply not large enough to make an impact on their own.

The regular Wilds did appear a lot more, even though I found the Speedy Wilds to simply be the worst since they cross the street faster than 1 reel at a time. It meant they would disappear faster than other Wilds without any extra benefits. They were simply not as good as all the other wilds.

When the Rock ‘n’ Roll Shuffle eventually did show up they provided a nice number of wins since they walk in a line of 4 Wilds, and can walk back and forth across the screen several times. Similarly, the Guardsmen’s March and Hooligan Advance can be useful but they require the correct regular symbols to appear to create any big wins.

I had a great time watching the different Wilds cross the street, and it didn’t take me very long to recognise the different types with their individual effects. Making sure that all Wilds only activated when there was a green crossing light also enhanced the idea of the setting in my eyes.

Spin Town is one of the best Red Tiger slots that have been released so far. The game oozes a tonne of atmosphere as well as having all the different features expertly implemented into the game. The idea of a top-down view of a street is clever and using the zebra crossing as a starting point was a great way of adding all sorts of different features.

The game lets players pick a bet between £0.10 and £200 per spin which is quite a big difference. Because of the volatility, it might be appealing to bet high but as I mentioned before, in my experience the volatility is a bit worse than it shows. Betting too high might be detrimental to your funds.

In contrast, the max. win is 800x your bet so you won’t be able to win as big as in other slots. The dependency on getting the right Wilds at the right time to create a big win is very unreliable.

Browse casinos with Spin Town and other slots from Red Tiger. Create an account and try the game for free before making a deposit.

You can play Spin Town in English, Finnish, Swedish, German and 18 other languages. 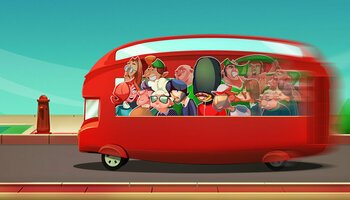