Spina Colada invites us to the beach on a beautiful island resort where we’re treated to fruity cocktails, a bunch of features and a wide variety of wins!

Created by Yggdrasil and released in 2017, I would be remiss not to mention its close gameplay appearance to 2016’s Winterberries. It incorporates many of the same features as this other game, even though Spina Colada looks and feels much better. I thought it was amazing how much difference a single year can make in the appearance of a slot!

Spina Colada puts us firmly in a beach chair with a cocktail in hand, sitting next to a bright blue outdoor pool on the coast of some tropical resort. From the first second the game draws you in with a beautiful cinematic before starting the slot itself. The 5-reel, 3-row playing field with 25 paylines is filled with fruit symbols, but they’re all drawn with high detail and almost leap off the screen!

As I said before, the closest resemblance to a slot is Winterberries in terms of mechanics. From the sticky symbols to the reel multipliers, Spina Colada is basically a turbo version of Winterberries. If you’re looking for something to do with tropical drinks, I would suggest Fruit Blast from Skillzz Gaming instead!

As can be expected from a slot set in a tropical paradise the soundtrack involves a lot of that type of music, probably Hawaiian or otherwise related to tropical beaches. The game does a good job keeping me in the mood with its music and sound effects.

Spina Colada’s reels are filled to the brim with delicious-looking fresh fruit and fruity cocktails. The art of each symbol is done extremely well, bringing a new dimension to the tired concept of fruits. Meanwhile, they are all oozing colour which makes it extremely easy to differentiate them.

The different symbols are from highest to lowest:

I love the look of all the different symbols and I appreciate that they’ve all been designed to fit the whimsical nature of the slot. Where Winterberries felt grounded in reality, Spina Colada embraces the rather larger-than-life appeal of a tropical vacation.

Spina Colada has quite an assortment of features that work well together. You never really leave the base game but it is spiced up with some free spin modes. That’s right, there are different free spin modes!

There are 4 special modes in Spina Colada. These appear randomly during the game and add a single pip to their counter. Get 4 pips on 1 of the counters and it triggers a Free Spins phase for that special mode. The special modes are:

Each special feature is added randomly to the game while playing for a single spin. Once you activate the free spins mode you will get 4 free spins. I suggest using the flexibility of choosing a bet between £0.10 and £125 per spin that you’re comfortable with playing for a longer time because the longer you play the more likely you’ll be getting the free spins mode. With a max. win of 3,200x your bet it could be quite a payoff!

The special modes are easily the highlight of the game for me. They appear on top of the sticky re-spins which means the game is almost constantly filled with the same symbols. That coupled with the multipliers meant I would get some big wins. The Medium Volatility comes out this way, with wins not being terribly common but the mechanics helping in creating rather large wins.

In many ways, Spina Colada is a more fun, colourful version of Winterberries. It has the same features enhanced with a few new ones, special free spin modes that focus on one of these features as well as an excellent collection of colourful symbols.

The background, animations and soundtrack all do their part as well in creating a lively, fun slot that will be a nice time for most people. Whether you’re a fan of classic slots or you’re looking for unique features, Spina Colada has something for everyone.

I had a blast playing this game and I hope Yggdrasil will explore the concept more in the future in a different setting! I’m curious to see what they can come up with.

Browse casinos with Spina Colada and other slots from Yggdrasil. Create an account and try the game for free before making a deposit.

You can play Spina Colada in English, Finnish, Swedish, German and 18 other languages. 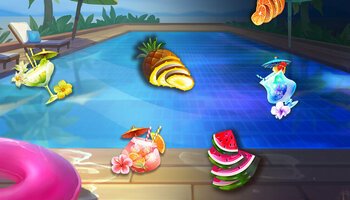