Grab your stick and smack these piñatas like they owe you money. This time it is not candy, but money that falls out.

Spinata Grande is a Mexican themed slot that brings the tradition of piñatas to you. The cutesy looking papier-mâché sculptures come in all shapes and sizes and are filled to the brim with cash.

Spinata Grande is one of NetEnt’s most well-known games. It was released in 2015 and can be found among many casino’s most popular games. Players seemed to love this game and I can easily see why. This game looks and feels right to me. It is a pleasant experience and a fun way to spend some time.

Spinata Grande is a five-reel slot with four rows and forty paylines. The game has a near-unique feature, that lets you get a win with only one colossal symbol. That is the hook of Spinata Grande and the reason why people love it.

Spinata Grande is a beautiful game that brings a Mexican vibe to your screen. Piñatas, Spanish styled housing and even a little Day of the dead mixed in there.

The graphical style reminds me of a couple of films. The first is The Book of Life, which came out a year before Spinata Grande and the other is Coco three years later. Both have a similar look and feel, even if the human design is a bit different. Spinata Grande is in a good company here and all the symbols in this slot could easily be replaced with characters of either film.

The sound is a mixed bag. The sound effects are good, the ambient noises are okay but the music, that is something that needs addressing. Now don’t get me wrong, the music is good, but it just isn’t well implemented. The music starts to play when you hit the spin button and stop when the reels stop. If you play fast, it gets annoying real fast. Luckily the music turns completely off if you activate the quick spin setting.

The symbols in the game are clear and suit the theme well. You find the traditional symbols from ten to ace alongside the four piñatas. The gameplay is very simple. Most of the time you just spin the reels and hope you hit a win. There isn’t a plethora of special modes, extra symbols and whatnots. The normal symbols themselves are the hook of Spinata Grande. You can win big with them, or more specifically, it’s the big ones that give the big wins.

During the normal play mode, there is one more symbol, but it is a rare one. There is a bonus symbol, that can show up and drop extra prizes or even free spins.

Spinata Grande has a balanced gameplay. You can get decent wins during the normal game mode, and you don’t feel like you need to get the free spins. Sure, they are great and offer even bigger wins, but they are not necessary. This is one thing I really like about this game.

The best way to get wins is to hope that a valuable Colossal Symbol hits the first reel. When a 3x3 symbol is on the first reel, you will hit a win on at least 23 out of the 40 paylines. Do this with a Colossal Wild during the free spins and you get a major win.

Spinata Grande is a good game in my books. It looks good, feels good, offers something unique and most of all, it is fun to play. A big thing in any slot for me are the wins. If they are not balanced, the game will feel like a chore. You know the feeling when you spin 20 times, and the best you got was half your wager. With Spinata Grande, you don’t need to worry about that. This game has proper wins that feel right.

Only nitpick I have about Spinata Grande is the music. It sounds good and I just want to hear more of it. Not just when the reels are spinning, but play the song all the time. The silence brings down the mood and it feels like the carnival is over.

I truly like Spinata Grande and it is one of my all-time favourites. I’m a sucker for a good looking game, and this is something you could see in an animated film. If Coco hadn’t already been made, I would suggest Pixar to take a look at this game.

Browse casinos with Spinata Grande and other slots from NetEnt. Create an account and try the game for free before making a deposit.

You can play Spinata Grande in English, Finnish, Swedish, German and 20 other languages. 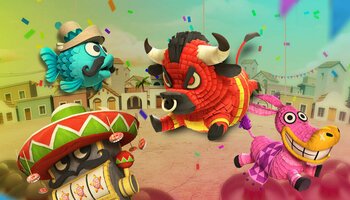