Spinfinity Man introduces us to a new brave superhero, this one standing for Cascading Reels, Colossal Symbols and a special Bonus Game. Who knows if you might be saved by Spinfinity Man too!

This slot was released in 2019 by Betsoft, who created a game with a non-standard playing field of 7x7 with a Cluster Pays mechanic. Instead of using paylines, the game sees you establishing wins with clusters of symbols before dropping away and making room for new symbols. Immediately when starting up the game I thought it looked great, even showing us the actual Spinfinity Man hovering next to the playing area. There are of course other slots like this, including Gemix and Reactoonz by Play ‘n GO.

The symbols in the slot itself aren’t the most original, with a lot of card letters and generic crystals. The background, in contrast, is a lot more inspired and detailed, giving us the setting of some big city that the titular superhero needs to protect. The symbols do look sharp and clear, and their simplicity helped keep it easy to oversee.

I thought the music was pretty much what I expected from a superhero slot. There is an exciting orchestral song playing in the background. The symbols dropping sounded a lot like beads falling on the ground which got a little annoying after a while. On the other hand, getting a special bonus symbol would trigger lasers shooting at a bonus bar with the right sounds.

The symbols in Spinfinity Man are either card letters or some variations of gems. There are only two real exceptions to this. The first one is the Scatter Symbol, the evil Mr. X that acts as the villain of the game and triggers the Free Spins mode. The other one is the Colossal Spinfinity Man symbol that is 2x2 and changes the blocks in different ways.

There aren’t a lot of different symbols but I still found it quite hard to get a win, mostly because a cluster of 4 or more symbols is not as easy as it sounds. The game has a listed High Volatility which was in line with my own experience. In regards to wins, the game does reward your patience over time as I saw my funds steadily increase but I picked smaller bets to facilitate this. Players can pick a bet between £0.10 and £10 per spin. This isn’t that much room but I felt it also prevented a very quick decline in funds if there was too much time between wins.

Spinfinity Man only has a few standard features but these features make room for yet more features, which can become a little overwhelming. Players that enjoy a standard slot experience probably already moved on to the next slot so I hope this won’t deter too many people that thought this game looked interesting.

The basic gameplay is probably familiar for people that have played slots with Cascading Reels and Cluster Pays mechanics. The Free Spins is largely the same as the base game, except that the Spinfinity Symbol becomes a Mr. X symbol with 1 of 5 Super Combos. Every time a Mr. X symbol appears on the screen during the free spins mode it awards 1 additional free spin.

To begin with, I’ll list the regular Spinfinity Man superpowers that activate whenever the 2x2 Colossal Symbol appears on the screen during the base game:

All 5 of these features exist to make room on the playing field, causing the reels to drop down and bring in new symbols that might create new pay lines.

When in the Free Spins mode, the Spinfinity Man symbol is replaced by the Mr. X symbol and subsequently the Super Powers are replaced by Super Combos which are exactly the same but with different graphics.

I thought these special features were fun but unfortunately, the Colossal Symbols were very rare, both in the base game and the free spins mode. It was to be expected in the Free Spins mode as the Mr. X symbol would grant additional free spins, but it was disappointing in the base game.

Spinfinity Man is a fun, high-tempo slot that is perfect for players that are looking for a modern and unique play experience. None of the features will be a complete surprise on their own but I thought the combination made for a unique experience.

The game has high volatility but it wasn’t too much of an issue during my time playing since the max. bet is rather low. This makes t harder to lose too many funds before the big wins come in, helping reach that point where it starts to pay off. Of course, it’s all depending on how the reels drop so don’t assume you’ll start winning coins.

If you’re the type of player that enjoys detailed, innovative slots that are using more of the possibilities of the video slot format you will probably enjoy Spinfinity Man. With a max. win of 5,038x your bet it might also be worth it for people who normally don’t play these type of games!

Browse casinos with Spinfinity Man and other slots from Betsoft. Create an account and try the game for free before making a deposit.

You can play Spinfinity Man in English, Finnish, Swedish, German and 22 other languages. 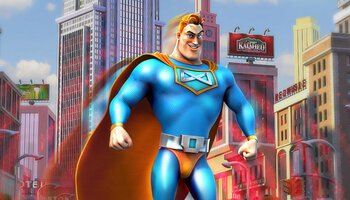