Stacked is a slot that brings us to a magician’s performance as they show us a series of card tricks that are presented on a playing field. The game not only features a scary looking magician but it also brings players wilds, free spins and multipliers to play with.

The game is built around a 4-reel, 4-row playing field that uses a total of 20 paylines to count wins on. It was developed and released by Betsoft in 2021, giving us a nice look at what the studio is capable of now. There is a tonne of details to be found in both the symbols and the background.

The most eye-catching element of the game is in the back, where we see a stage with both the magician and a chicken sitting on a mystery box. The magician is slightly animated, showing how he’s breathing and waiting to perform his tricks. A big part of the gameplay is him activating random features during the base game, which are shown by him casting a spell.

When it comes to the appearance of the slot, things look tidy and colourful. There is a strong cartoon style present which makes it all look a little unsettling. The symbols on the reels aren’t very imaginative, mostly either related to the act of magic or simple card suits. Then again, in the context of a magician performing card tricks, there are obviously fully in line with the theme.

Stacked has symbols that can be divided into the usual categories of low- and high-paying symbols. The playing field has a slightly different shape than most games, opting for a 4x4 instead of a 5x3 playing field. I didn’t really notice any differences when it came to getting wins since the number of paylines is still the same.

One thing to mention is that the ability to choose a bet is still there, with the player able to pick one between £0.20 and £150 per spin. However, the jumps between bets are rather high, for example, jumping from £0.70 per spin to £2.50 per spin which I found to be quite a lot. Especially considering other slots allow you to increase a bet by as little as £0.10.

The game does come with Medium Volatility meaning that it is quite liberal in granting wins but these won’t often be big wins. The big wins are more spaced out and players shouldn’t expect to see them a lot. Still, as I played I did manage to increase my funds beyond the starting point once. Another time when I played, I lost half my funds and never made them back. So be aware of this when you pick your bet.

When it comes to the symbols, the game has the following ones:

The features that are present in this game include:

Whenever the free spins mode is activated, the player will see the playing field with all the tiles covered. Depending on the number of wilds that helped activated this mode the player gets to turn that number of tiles. So if they had 4 Wilds on the screen, they get to turn over 4 tiles.

These tiles can reveal the following additions:

It’s possible to get the same bonus multiple times, or any combination of these features.

Stacked is a funny slot that has a strong theme that it carries through in every part of the game, from the appearance to the characters and the symbols to the features. This makes it a very immersive experience where you are really transported onto the stage.

I thought the volatility could be quite punishing but it can also turn around and be awarding. Just keep a close eye on your funds. The appearance of the free spins mode was rather rare which is a shame since it offers the best opportunity at getting big wins.

In my experience, picking the right features to help you during the free spins mode will be the biggest factor in deciding whether or not you’ll walk away with a big win. If you like a classic slot with a lot of features that don’t mess with the base gameplay too much, I think you’ll have a good time with this one.

Browse casinos with Stacked and other slots from Betsoft. Create an account and try the game for free before making a deposit.

You can play Stacked in English, Finnish, Swedish, German and 19 other languages. 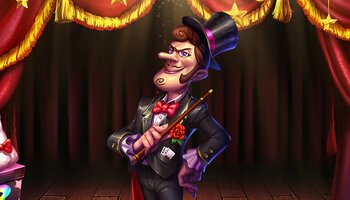