Stampede brings us back to the African plains where we have to dodge herds of angry or frightened animals as they rush across the screen. Multiplier Wilds and Free Spins are in their tracks, however.

The slot with the African twist came out in 2017 after being developed by Betsoft. The game’s setting is communicated to the player clearly, with a nice-looking painting as the background overviewing African tall grass with mountains in the distance. The 5-reel, 3-row playing field is also filled with symbols that remind of Africa.

Most of the high-paying animal symbols are animated when part of a win, while the Elephants are even animated when they’re not. The game has 1,024 bet lines that help in getting wins but even so, the game is stuck with High Volatility. Players that enjoy a lot of visual flash to keep them entertained will be out of sorts. I thought the game looked pretty but also rather bland and stale.

The music in the slot is about what you’d expect, playing what sounds like African music or at least something that comes close to it. The jingles when there is a big win feel a bit out of place as they sound rather generic. I think some animal sounds might have also benefited the setting.

Stampede features the classic divide between high- and low-paying symbols. The high-paying ones are all based on famous savanna animals, with most of the art looking original. I did hope for some more movement but alas. The low-paying symbols are disappointingly all simple card letters, all of them giving some fitting patterns on them but at their core very unoriginal.

The game lets you pick a bet between £0.40 and £200 per spin, which considering the high volatility might be wise to make use of. I found the game to have my funds trend upwards but there were periods with no wins at all which caused them to go down a lot faster. Having a bet that’s too high will rapidly drain your funds if you’re not careful.

As the game doesn’t take any chances when it comes to the gameplay, the features found in Stampede are about on par with what you’d expect from a classic slot.

The Wilds in the slot are represented by trees, but during the Free Spins mode, they can appear with either an x2 or x3 multiplier. They only apply to wins they are a part of, unfortunately. The Wilds didn’t show up a lot in my experience. Obviously, this could be different for you.

The Elephant high-paying symbols often showed up to fill entire reels which aren’t mentioned as a feature anywhere but did help in getting some big wins. The Elephant also only needs 2 symbols on a payline to count as a win.

I didn’t think the Free Spins mode played a very big part of the game considering the few times I triggered it. Still, it did help to get some big wins that elevated my wins. Seeing my funds decline over time when I didn’t get the mode to activate was ample proof.

Players that are expecting a lot of features won’t find those here. The game is very simple in regards to the ways it changes the core gameplay. If you’re a fan of something more engaging and intricate, you won’t find it with Stampede.

Stampede is a slot that fits the library of Betsoft fairly well. The graphics look outdated for no real reason, which makes me think it’s actually a deliberate choice. They aren’t necessarily ugly but they do look pixelated and washed out.

The features are extremely basic and the slight originality of the multiplier wilds is hidden behind the free spin mode. Players who enjoy a game with some original twists to it will be left disappointed if they look for those with Stampede. People that want something slow to relax with will be pleasantly surprised though.

The maximum win of Stampede is 3,847x your bet which is not as large as it can get but still much larger than most other slots out there. I think this game will appeal to both casual players and those that enjoy high volatility players. The only requirement is that they don’t care too much about the slot’s appearance.

Browse casinos with Stampede and other slots from Betsoft. Create an account and try the game for free before making a deposit.

You can play Stampede in English, Finnish, Swedish, German and 22 other languages. 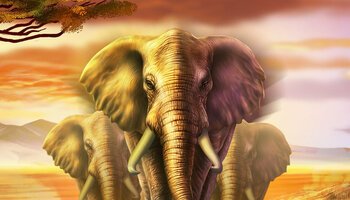