Starburst is an iconic slot game by software provider Net Entertainment. Since its release back in 2012, this game keeps cropping up in casinos’ arsenal of game making it a staple player favourite.

With a colourful yet ethereal theme, online gambling players have at some point or another, come across this game. Partly because casinos tend to run free spins promotions on this game, and partly because it has low bet sizes making it ideal for a gambler with a smaller bankroll. It pops up so often, that it has lost its lustre for me. As I am writing this, I have to think back of the time when this game was released to much anticipation. Not trying to dampen the spirits here, but this game doesn’t relent and it keeps going strong like a pop song in the UK song charts.

With a cosmic theme, the slot game itself is visually stunning with plenty of glitz and sparkly gems. Fast-paced, symbols, include a range of colourful gemstones, a lucky red 7 symbol and the bar. If you are looking for a slot game with a space-theme, hop right in and join on this trip to outer space.

What many players fail to realise is that this game comes with a ‘Win Both Ways’ system, meaning that you can achieve a range of winning combinations by landing matching symbols on reels from 1 to 5, from left to right and vice-versa.

The game is played out to a tense soundtrack booming as you spin the reels. With its melodramatic rumble in the background, the game offers rather electrifying gameplay. In terms of graphics, online slots have come a long way since this game was released. I would go as far as to say, that it has an arcade-game feel to it. There are no Parallax Scrolling effects, which is more evident in more modern slot games.

For the discerning gambler who wants to spin the reels and wants a no-fuss slot game, Starburst provides all of this in terms of entertainment.

Although it is a classic slot game, it lacks in features when compared to other slot games. There is no free spins bonus round, no multipliers and ultimately no scatters to boost the entertainment factor.

It might be a great slot game for those new to online gambling, but I find that experienced players could lose interest in this game relatively quickly. With no flashy graphics, there is no ‘wow’ factor to trigger any thrills or to set the pulse-raising.

If you are on a smaller bankroll, this would be a great option, since bets start from as little as £0.10. Overall, it only has an RTP of 96.1%, so you can’t expect to achieve as many wins as you would at games with a higher RTP, such as Blood Suckers or Jack Hammer II.

There are no tips and tricks I could share to boost your winnings. Being careful with your bankroll and placing bets in line with your budget should prolong gameplay. After all, this is a low volatile game so you can expect small wins regularly.

With a maximum win of 500x your bet on each re-spin, Starburst has stood the test of time, to become a staple casino favourite.

Browse casinos with Starburst and other slots from NetEnt. Create an account and try the game for free before making a deposit.

You can play Starburst in English, Finnish, Swedish, German and 20 other languages. 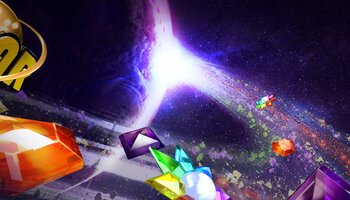 In terms of design and looks Starburst is a great game. I lurv the colour scheme! All those bright sparkly jewels on that subtle purple background. Awesome! I played at Genesis Casino, which also has a purple theme, and the look was really cool. I am massively into colour co-ordination (you should see my tie collection!) and Starburst is lovely. However, ultimately it is the gameplay that determines how popular a game will be. Starburst is not poor in that department either, but neither is it in the top 10%. As a game for giving away FREE spins to new players Starburst will always be in demand. The lack of a real jaw-dropping feature though does mean that over time, the novelty factor will wane.

The original Top Dog of the slots