Stars of Orion makes use of the constellations as a source of inspiration. Looking up at the night sky players are treated to a special view as they try to get the stars to align. The game further includes cascading reels, cluster pays and wilds.

This game, developed by Elk Studios, immediately creates a very ethereal sense of style. The use of deep blues doesn’t just create a feeling of calm but also simulates the night very well. As the slot was released in 2021 it’s an excellent representation of the developer’s current production values.

Players will play on a playing field that doesn’t make use of paylines but is built around the Cluster Pays mechanic. That means symbols are counted towards a win when at least 5 of the same symbol are touching. When that happens, the winning symbols disappear and new tiles drop down to fill the space. As a result, this can trigger multiple wins in a row.

Playing this slot feels very relaxing. The graphics are sharp and clear, seeped in a sense of mystery and calm thanks to the background image. The symbols themselves are quite bright in contrast but don’t feel too distracting. Triggering the special Orion’s Wild feature shows a great-looking constellation on the screen.

Stars of Orion takes its inspiration from the stars but it doesn’t bleed into the design of the symbols so much. All of them are simple round shapes in order to facilitate the cascading reels. At the same time, they use single colours to show their value. The use of small animals inside some of the symbols is used for the higher-paying symbols. It was refreshing to see a slot without card symbols or card letters though since those would have felt more out of place.

The game has High Volatility which shows by the fact the payouts are very low. Players need to get a number of wins in a row, with these wins charging up multipliers over time. This means that initial wins pay out very little and their value increases over time. However, getting multiple wins in a row happens only rarely. As a result, the RTP of 95% feels accurate while also being a lot lower than the average slot.

Besides that, players have the ability to pick a bet between £0.20 and £100 per spin. This allows all types of players to enjoy this game. At the same time, there is the prospect of a shot at the jackpot of 10,000x your maximum bet. That’s definitely a lot more than the average but will obviously also be quite unattainable for most people.

The game has the following symbols, sorted by importance:

Stars of Orion makes use of some original features that are nonetheless likely familiar to a lot of players. The different features by themselves aren’t uncommon. The way some of these are connected gives the game an original feel.

Although the game does have a free spins mode I found it exceptionally hard to trigger. I only saw it appear once. Players should thus prepare to spend most of their time in the base game. This isn’t a huge punishment, even though the free spins mode has its benefits.

During the base game, players try to get multiple wins in a row in order to fill the meter at the bottom of the screen. Every time this bar is filled, the multiplier is doubled. Players start with 1x, then 2x, and so on until the maximum multiplier of 64x. This resets every time the game stops granting consecutive wins.

In the free spins mode, this functions the same except the meter is not reset between spins. With 10 free spins, this means that it is more likely the game will grant the maximum 64x multiplier by the end.

Stars of Orion feels like a casual, fun slot that manages to capture the quiet, nightly tone quite well. Players can switch off their brains and simply watch the gameplay. The way the cascading reels let the symbols roll down the reels is also very satisfying. With the use of simple but clear symbols, I never lost track of what was happening on the screen.

As far as the features are concerned, the game offers plenty of variation. There are ways to get superclusters, extra wilds and even have symbols swap places to create a win. The free spins mode is the most interesting but also unfortunately hard to trigger.

The game has a low RTP and high volatility, so it’s definitely not for people that want to see a lot of wins on their screen. High rollers will probably be interested in the massive jackpot which can grant a jackpot of up to £1,000,000 when playing with the maximum bet.

Play Stars of Orion for free

Browse casinos with Stars of Orion and other slots from Elk. Create an account and try the game for free before making a deposit.

You can play Stars of Orion in English, Finnish, Swedish, German and 19 other languages. 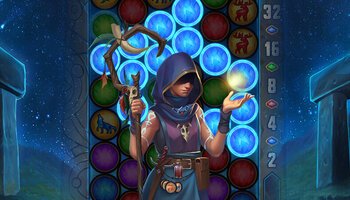