Online slot game Steam Tower sees Swedish software game developer Netent, explore the theme of steampunk which envelopes this game in its entirety. If you are not wholly familiar with the term ‘steampunk’, it is a sub-genre of science fantasy that captures designs inspired by steam-powered industrial machinery.

Some people would go as far as to classify it as neo-Victorian when it comes to style since it combines elements of technology and futuristic inventions that 19th century Victorians would have envisioned. If you are familiar with the literature of Mary Shelley and Frankenstein’s Monster, you should have a better idea and image of the genre.

Being familiar with the concept doesn’t help you in this game, and likewise, not having any knowledge of this term won’t compromise your chances of winning. With a motto such as ‘Climb the Tower and Win’, you’ll quickly understand what the game entails and what your main aim is.

The music accompanying the game in the background is also fitting, while the man dressed in a top hat, cape and goggles, which might remind you of American festival Burning Man, stands stoically to the left-hand side of the reels with an arrow gun in hand.

In terms of visuals, this online slot definitely looks pleasing to the eye and does a great job in embarking you on a journey that is reminiscent of the 19th century. Although I am quite familiar with the team ‘steampunk’, when this slot game was released, it provided plenty of thrills. I initially thought it was a game based on fairy tales, where the main protagonist must climb some tower to save a princess. If you remove your rose-tinted glasses, you’ll immediately realise that this is the concept of the game.

Set atop of a metal tower (obviously), this slot game is built over five reels and three rows. The lowest paying symbols are the A, J, K and Q icons as we have come to expect. There is also the top of a tower as a symbol that is also low paying.

The male and female steampunk characters, as well as the Dragon’s eye, are some of the highest paying symbols. All of the symbols are attention-grabbing, bringing the perfect concoction of animation and graphics into one potent compelling gameplay. To join the reels and the rows, NetEnt has added a total of 16 pay lines to the games.

Back to our moustachioed main man dressed as a gentleman. The man himself plays a pivotal part in this game. His hook is the wild symbol in this game, while the man himself can also pop up stacked across five reels.

He also triggers the free spins bonus round, by landing one or more stacked wilds, encapsulating all positions on a reel. When this happens, you receive ten free spins. Your main mission here is to climb to the first floor of the tower.

Climbing up as far up the tower as possible, rewards you with bigger prizes and multipliers. Make it all the way up to the 16th floor to rescue the girl. To do this, you need to land a few grappling gun icons, to help you move up between levels and also gain two extra spins.

Making it all the way to the top floor rewards you with a supremely generous 1,000x multiplier.

With a slot game that boasts an RTP of 97%, you can’t go too wrong. I have personally played this game quite a few times, and though it looks exciting at first, it fails to draw me in. I especially love the graphics and the fluidity of the game, but beyond the free spins feature and the wilds, there is not much to captivate my attention for long spans of time.

Perhaps this is a blessing in disguise, or perhaps, the game itself lacks the edge I crave. The Dragon at the very top can reward you with 7x multiplier and a 1,000 sweet coin reward, but the chances of getting past the eighth floor are minuscule. In my years of playing slot games, I have never succeeded to get past a few floors.

I found myself stuck between floors five and six, which only come with a 3x multiplier. The free spins, on the other hand, are very easy to activate, but trying to get my way to the top, proved to be exasperating.

I have entered the bonus round a few times, and I fervently hoped to see the Dragon, to no avail. In general, I think this slot game is better suited for beginners who don’t quite understand the mechanics of a slot game. Because Steam Tower has a simple concept, it is easy to learn the ropes, but experienced players might find this game less than alluring.

Browse casinos with Steam Tower and other slots from NetEnt. Create an account and try the game for free before making a deposit.

You can play Steam Tower in English, Finnish, Swedish, German and 20 other languages. 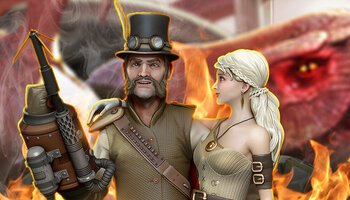