Stickers is a fun, colourful slot that uses the idea of reels filled with stickers as the basis for an original game! I’m going to see if that’s enough to keep it interesting.

Developed by NetEnt and released in 2015, Stickers offers players a very colourful, whimsical game experience. The first thing players will notice are the many different stickers that fill the 5-row, 3-reel playing field with a total of 20 paylines.

When it comes to the graphics, Stickers does everything well without going overboard. The symbols are stickers which mean there isn’t a lot of flexibility when it comes to appearance, and there aren’t many animations either. With a lack of special features like a bonus game or free spins, it means there also weren’t a lot of opportunities for the creators to inject original ideas.

All in all, I’d say the slot looks very good but basic. The symbols are sharp and colourful, fit the sticker aesthetic and are quick to tell apart. On the flip side, they’re simple, not animated and based on very popular symbols.

When it comes to the soundtrack, there isn’t much to add that doesn’t also apply to the graphics. It’s whimsical, fits the slot well and doesn’t do a lot to surprise the player. That’s fine though, as it’s only supposed to enhance the experience.

Stickers has a variety of different symbols, all presented as if they’re stickers shown by their thick white edge. They are animated a little bit when part of a payline but are otherwise completely static.

Not that many symbols as some other games, which fits the listed Low Volatility. With the ability to choose a bet between £0.20 and £200 per spin it’s possible to adjust the size of the wins. A max. win of 200x your bet is quite disappointing, however.

Stickers is a very basic slot with only one real feature to mention. That isn’t necessarily bad since there are plenty of people who enjoy a basic slot experience. If you’re looking for something a little more exciting, I wouldn’t recommend this game.

The only real feature to discuss is the Sticky Re-Spin Wilds. Whenever a Wild appears on the screen it will Stick to its current position and automatically trigger a re-spin. During the Re-spin the Wild stays in position. If there is a new payline win it will be added to the total. If the re-spin adds another Wild to the screen, this one will also become sticky and another re-spin will trigger.

For me, this feature was a bit of a mixed bag. Sometimes the re-spin wouldn’t yield anything, not even a single win before it disappeared again. Other times it would add up to 5 or 6 Wilds on the screen and repeat big winning paylines repeatedly. As always, it’ll be different every game.

It is a good feature, even though it’s only a small part of the game. I enjoyed the little boost it would give even though the low volatility meant the numbers stayed low. It did help a lot in keeping a net positive.

Stickers is a NetEnt slot for people that love the attention to detail that NetEnt offers without any of the extravagant features or flashy animations. The slot gives players a steady, enjoyable experience without asking too much of them.

I thought it was a nice time to spend but I got bored of it quite quickly. That’s because I enjoy bigger slots with more features and some excellent animations, not because Stickers is bad.

If you enjoy slots like this, I would suggest you give Sparks a try. Also created by NetEnt and in many ways the same basic design as Stickers. What about Flowers? An older NetEnt slot but still very much a favourite among many players for its simplicity and enjoyable way of playing. Plenty of options to choose from!

Are you a player that likes simple but well-made slots, with a lot of colours and a fitting soundtrack? You can’t go wrong with Stickers in that case. If you’re someone who is looking for something more modern or flashy you might want to give it a pass.

Browse casinos with Stickers and other slots from NetEnt. Create an account and try the game for free before making a deposit.

You can play Stickers in English, Finnish, Swedish, German and 21 other languages. 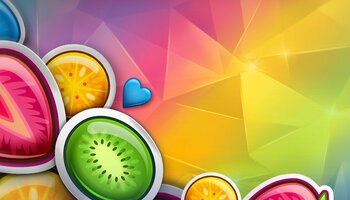