Sticky Bandits 3 - Most Wanted is a cartoony slot set in the Wild West when bandits ruled the plains and made their money robbing banks. The game features some amazing graphics and a lot of style, as well as sticky wilds and free spins.

This game was released in 2021 by popular game developer Quickspin. As the name suggests, it’s part of a series. The first one came out in 2018 while the second game, Wild Return, was released in 2019. Each time the studio released it has shown some extra attention to detail or some more exciting graphics. The gameplay has stayed relatively the same, however. As always, the game takes place on a 5-reel, 3-row playing field. This time with 9 paylines.

The Western theme is integrated into every aspect of the game. During the base game, we can see the famous sandy plains in the background. Unfortunately, the image is static but it still sets the mood well. The playing field is filled with symbols that somehow relate to the Wild West setting. Here too the symbols aren’t animated but they look clear and detailed.

A game like this isn’t much without a fitting soundtrack and although the music is a little disconnected, it does a good job at helping the mood. There is a lazy, very soft western song playing in the background of the base game. When there’s a win, we’re suddenly treated to a rather angry guitar riff. A bigger win will even trigger a short jig. It was a bit disconnected and the change in tone could have maybe been done a bit better.

Sticky Bandits 3 - Most Wanted uses a pretty obvious selection of symbols when considering the source material. The low-paying symbols are card letters but those make sense when we look at our view of the Wild West, with gruff cowboys playing poker in the saloon. The high-paying symbols are original drawings of other familiar tropes, such as sticks of dynamite, whiskey, or a vault. It looks good but the symbols are largely not animated and I feel like it could have been a bit more creative.

The player will have to deal with High Volatility in this game, although I didn’t find that it bothered me a lot. Even though big wins are rare, the slot does provide you with a steady trickle of smaller wins that keep your losses to a minimum. After playing for more than half an hour I was still very close to my starting funds.

Players can obviously pick a bet to help deal with the volatility, selecting one between £0.09 and £90 per spin. The game also features a maximum win of 22,468x your bet. This is an odd number for a jackpot but it is still noticeably bigger than what most older slots offer.

Sticky Bandits 3 - Most Wanted is a pretty simple slot when it comes to its features. The game doesn’t add a lot to the normal gameplay loop with only the expected elements that we see a lot in modern slots. For completion’s sake, here is a list of the features you can find in this game:

Most of the game takes place on the main screen where players will occasionally see a wild appear. It wasn’t uncommon but they aren’t showing up every spin either. They can also help create a win. There are a large number of different wilds, based on the 5 characters, but they all act the same way. I think it could have been a way to introduce different types of wilds but alas.

The payouts for the different symbols are quite high, especially when getting a longer winning bet line. This helped with the high volatility but is not something that can be counted on. As I mentioned before, my funds stayed very stable during my time with this game.

Sticky Bandits 3 - Most Wanted is a solid slot with some great graphics. If you were a fan of the previous Sticky Bandits games you will find more of the same here. I wish there had been some more innovations when it came to the presentation. Maybe some more animations would have been nice.

Meanwhile, the gameplay is rudimentary and frankly a bit boring. Players who want to play a normal classic video slot will be happy with this though. There are only really two features to consider, and other than that you can sit back and relax.

Power players might be most interested in this game since it offers such a sizeable jackpot, while the volatility didn’t feel very punishing. More casual players will probably enjoy the look and feel of the game but might get a bit bored after a while.

Browse casinos with Sticky Bandits 3 Most Wanted and other slots from Quickspin. Create an account and try the game for free before making a deposit.

You can play Sticky Bandits 3 Most Wanted in English, Finnish, Swedish, German and 24 other languages. 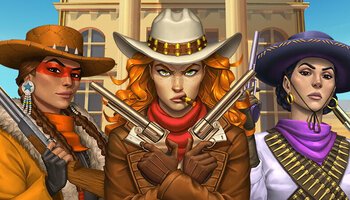