Sticky Bandits: Wild Return is set during the volatile years of the Wild West, where small towns in America were still subjected to roaming bandits and sheriffs that enforced the law through shooting first. Players can experience this time with free spins, colossal symbols and a bonus game instead.

The game was developed by Quickspin and became available to play in 2019, which means the game has some of the best graphics the studio has shown so far. The slot obviously takes place in the Wild West, offering us an inside view of a darkly lit bar while the 5-reel, 4-row playing field dominates most of the screen. We can see people talk as they sit at their table or smoke a cigar at the bar, small details that make it come alive.

With 40 paylines, the game offers a moderate number of ways to win, using the standard method of deciding wins. The symbols are hand-drawn, with the low-paying symbols using the classic card letter format. In this case, seeing as it is set in a saloon in the Wild West, it actually does make some sense. The more important symbols are all original art of different characters and items.

Even though the game might make it obvious that the music used would be the standard country fair, instead, it chooses to keep things a bit more general. Although we can hear a banjo play, it’s more a separate style of music you wouldn’t immediately think of when seeing this setting. That said, I thought it fit the vibe pretty well.

Sticky Bandits: Wild Return gives the players a lot to look at. When the base game plays we can see the saloon in the background, while the bonus game will bring us to a classic fruit machine and the free spins mode is set outside at the town square. These details not only help make it clear what part of the game the player is at, but also increases the immersion.

As is more and more common with slots these days, this game comes with High Volatility. The slot doesn’t offer any huge payouts through regular wins and the player is instead dependent on one of the special features to activate. The colossal symbols in the game are the same symbols but at a 2x2 or 3x3 size. These obviously help a lot, as do the Wilds. For the biggest wins, players will need to activate the free spins mode.

To deal with the volatility, it’s possible to choose a bet between £0.20 and £100 per spin. Power players might be inclined to go large, while casual players would probably do best sticking to the lower bets. If you’re looking for a big jackpot, this game doesn’t offer it. Although the max. win of 1,145x your bet is obviously a nice amount, it doesn’t compare to other slots with the same volatility.

When it comes to the symbols in the game, you’ll find the following ones:

Sticky Bandits: Wild Return sees a number of features that will change up the gameplay without becoming too distracting.

You probably won’t see a lot of surprises during the base game, although it’s always possible that a colossal symbol appears on the screen. I had it happen quite a lot but it was only rarely part of a win. The colossal symbols can appear anywhere, meaning a 3x3 symbol on reels 1, 2 and 3 will instantly generate a number of wins. This is however pretty rare.

The free spins mode is also quite uncommon, having only triggered it once during my time playing. As it can turn symbols into Sticky Wilds it would theoretically be a good part of the game for big wins, but in my experience, the size of my wins was lacking. It did help a little bit but I had lost my winnings within a few normal wins.

I think maybe the fruit machine is the most appealing part of the game. It’s easy to trigger since it only requires a single symbol on the screen. It plays exactly like the standard fruit machine, meaning that a win will just be awarded as normal.

Sticky Bandits: Wild Return really shines in its presentation. I felt like I was really in a Western town where the bandits ran the place. The subtle animations in the background as well as the varied locations helped solidify this feeling.

The gameplay is a lot less interesting. It never got boring but there is very little to engage with on a mechanical level. A lot of the time, players will be waiting to see one of the special features to activate. That doesn’t mean the base game has nothing to offer but the developers clearly intended the big wins to be hidden behind the free spins and fruit machine modes.

If you’re looking for a fun but casual slot with some great graphics and a Wild West theme, I would recommend this slot. Players that want to engage with something simpler or something more experimental might want to keep looking.

Browse casinos with Sticky Bandits: Wild Return and other slots from Quickspin. Create an account and try the game for free before making a deposit.

You can play Sticky Bandits: Wild Return in English, Finnish, Swedish, German and 16 other languages. 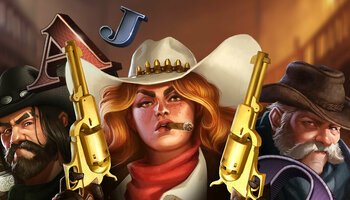