Sticky Bandits puts us in the dust-covered cowboy boots of a gang of outlaws that roam the Wild West, holding up trains and making off with the winnings. This Quickspin slot features Stacked Wilds, Colossal Symbols and a Free Spins mode to help you on your way.

Released by this popular studio in 2017, Sticky Bandits take the relatively popular idea of the Wild West to create a pretty unique slot around it. The game comes with a 5-reel, 5-row playing field that holds 30 paylines. The game is filled with different characters, various cowboy-related items and filled out with simple card letters for the low-paying symbols. Wins generally don’t activate any animations, keeping the game playing quickly but rather static.

The art looks good, showing off a drawn background of sandy desert plains intercut with a train track. The characters look realistic while still having the cartoony look that fits the rest of the slot. I liked that they went for a rather colourful approach instead of something dour and lifeless that the setting might have called for.

If you think about picking music for a slot set in the Wild West, the choices seem rather obvious and Sticky Bandits went for those choices. That doesn’t mean the quality is poor but rather that you won’t hear anything surprising. The music during the spinning of the reels is pretty muted with the occasional banjo and getting wins triggers a generic jingle. When there is a bigger win you’re treated to a more elaborate song which I thought sounded nice.

Sticky Bandits has a number of symbols, including original characters, items and card letters. I am always disappointed at seeing this as it feels pretty lazy. Surely a setting like the Wild West has enough inspiration to make all the symbols original. I suppose this is simply a cost and time-saving measure, but it disrupts the theme too.

The payouts for wins are low, with most of the symbols only barely making back a single bet. This is compensated somewhat by the features and the fact that wins are relatively common. Still, the game sits on High Volatility.

Sticky Bandits comes with a series of simple but entertaining features that augment the gameplay in subtle ways. The player is likely already familiar with the different elements in this slot but it still helps to list them quickly:

The Wilds in Sticky Bandits are always Colossal, making them 2x5 in size. They can fill 2 reels at the same time but during my time playing they rarely stopped to do this, instead only covering part of the playing field.

Getting the Free Spins mode to activate was a big variable. Sometimes it would take me a hundred spins to activate it once, other times it would almost trigger back to back. It all depends on the Bonus symbol appearing since the Wilds are relatively common.

The game using the Wilds as both a regular Wild as well as part of the Free Spins activation was interesting although not unique to this slot. Technically it should be a little easier than the usual 3 Bonus symbols method, but in practice, it had about the same success rate.

Once the Free Spins mode was activated I was not certain of any big wins either. There is one feature that activates during this mode, where any Wilds that appear on the screen become Sticky. Unfortunately, Wilds are not more likely to appear so it did happen that I didn’t have a single Wild appear during a Free Spins mode.

Overall, I found the features to be an acceptable addition to the gameplay but they won’t suddenly change the game into a brand new experience. The classic slot vibe it gives off stays in firm control the entire time, and players are unlikely to be surprised.

Sticky Bandits is a good example of what kind of slots Quickspin generally releases. It is a competent slot with some good graphics, decent features and an alright experience. I doubt many players will remember this game once they stop playing it but it offers a solid gameplay loop while they are.

There are no real big draws that I noticed while I was playing that will get you coming back for more. The game has a max. win of 739x your bet which isn’t much compared to other games. Players can pick a bet between £0.90 and £90 per spin to help this along a bit but it’s an undeniably low jackpot.

I enjoyed my time with Sticky Bandits but it’s not interesting enough to really feel like it has staying power. The features come in a nice mix but it’s not going to help the slot set itself apart from all the other games that pander to the same audience.

Browse casinos with Sticky Bandits and other slots from Quickspin. Create an account and try the game for free before making a deposit.

You can play Sticky Bandits in English, Finnish, Swedish, German and 22 other languages. 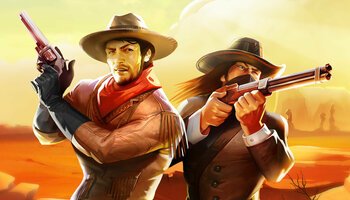