Stone Age takes us way back in time to prehistoric civilization where we play a slot filled with cave drawings and a selection of items that were used back then. The game further gives us expanding reels and free spins to play around with.

This game was developed and released by Endorphina in 2015 and was apparently part of a creative movement since this was also the year another creative slot called Origami was released by them. I say this because Stone Age impressed me with their creativity and attention to detail. The slot is made to look like the ancient imagery of archaeological finds most of us will be familiar with.

The 5-reel, 3-row playing field is filled with symbols that either depicts cavepeople, their tools or the ancient drawings found on the walls of caves. This all blends together nicely with the use of a light brown colour scheme, making it feel like a coherent whole. I was actually impressed by the whole appearance of the game, something that Endorphina hasn’t been able to do a lot of times.

Unfortunately, their creativity didn’t extend to their sound-design as the game doesn’t really have any music to speak of. Most of the sound effects are also very jarring, including electronic jingles or the sound of a bell whenever a win is triggered. With so much care put into the appearance of the slot I would have liked to see their sounds to fit the theme.

All of the symbols in Stone Age are unique and created specifically for this slot. Although they are all hand-drawn the images look realistic and are clearly based on actual items and cave paintings. Whenever they’re on one of the 20 paylines in the game, each of them has a unique animation. We’ll see the bow and arrow get drawn or the knife is sheathed, for example. This gives the slot a more relaxed feeling as the speed of the spins is a little lower than normal.

Even though the game doesn’t have a lot of symbols and quite a lot of paylines, it’s still listed with High Volatility. In my experience, that fit my time playing as I found wins to be pretty spaced out as well as being a little higher than normal. Still, the game requires the free spins mode and the expanding reels to grant really big wins.

The game has a set of features that appeared in other Endorphina slots as well. Temple Casts for example has the exact same combination of features, making it seem like the studio is comfortable with these and likes how they add to the gameplay. In my opinion, the features work well together and are easy to figure out, but they make the game a lot more volatile.

The base game feels rather simple since the only real feature that is present here are the Scatters. As I played, these didn’t appear very often and when they did there weren’t often enough of them to trigger the free spins mode. Since it also takes at least 3 Scatter symbols to trigger a win, this meant that the only feature during the base game often did nothing.

Once there are 3 or more Scatters on the screen though, the game switches to the more interesting free spins mode. Endorphina has put the most important features into this mode so it is very volatile. Not getting a good result can seriously hamper your ability to go into positive funds.

Speaking of funds, players can pick a bet between £0.20 and £200 per spin. That’s quite a high maximum bet, especially when considering the max. win of 5,000x your bet. There are other Endorphina slots with high volatility but a much lower jackpot, which makes Stone Age more appealing.

The use of familiar features is something that felt very unoriginal to me, but I can’t argue that it creates an effective highly volatile type of gameplay. If you are the type of player that enjoys high risk, high reward slots, this combination of features definitely helps with that.

Stone Age showed me that Endorphina is really capable of creating evocative, beautiful slots that make the player feel immersed in their topic. It’s also an original setting and shows a lot of care in how it is presented. Unfortunately, the sound-design leaves some things to be desired and undoes a lot of the work the appearance did.

As for the gameplay, players won’t be surprised by unique or rare features. Most players will already be familiar with the possibilities and it is simply a decision whether or not this type of gameplay appeals to you. With so much focus on the free spins mode, not triggering it will mean that you continue to lose coins with no real way to win them back otherwise.

If you’re a player that enjoys a beautiful slot that does a great job at setting the scene but with a rather punishing gameplay, Stone Age is for you. More casual players or people that enjoy a lot of different features will probably only enjoy this game for the looks.

Browse casinos with Stone Age and other slots from Endorphina. Create an account and try the game for free before making a deposit.

You can play Stone Age in English 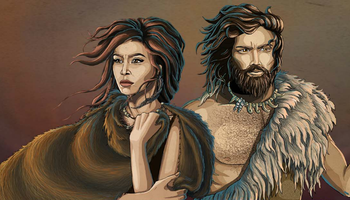