Street Fighter II is perhaps one of the best and well-known arcade fighting games in video-game history, and NetEnt has brought it back as a unique slot!

Developed by NetEnt and released in 2020, Street Fighter II is a video slot unlike any other I’ve seen in my time playing slots. The game uses all the classic imagery, sounds and animations from the popular arcade fighting game, recreating the experience in this amazing slot.

Even though I was never very much into the fighting games, I remember spending a lot of time playing Street Fighter II when I was younger, so starting up this slot immediately brought memories flooding back. It’s quite amazing to what extent NetEnt has managed to recreate the feeling of this classic game.

At the heart of the slot is a 5-reel, 5-row playing field with no paylines. Instead, it uses the cluster feature, where 4 or more symbols have to touch vertically or horizontally to count as a win. The bigger the cluster, the bigger the win! With such a large playing field and quite a big number of different symbols, this was quite hard to accomplish, fitting the game’s High Volatility.

When it comes to the graphics and sound design I can’t say anything bad about this slot. It looks and sounds exactly like the classic arcade game, down to the voice lines spoken by the different characters and the effects you see across the screen. I’m super impressed with how the developers managed to translate such a vastly different game into a slot experience.

The game has a wide variety of symbols, mostly due to the fact that there are a total of 8 characters to choose from, each with their own symbols. Luckily, they all have the same variations and value. The low-paying symbols are high card symbols, made to look like the letters players could use to enter their initials in the real game.

Every character has a Win and a Defeat symbol, which count as separate symbols when it comes to creating wins. These come as both single symbols as well as 2x2 Colossal Symbols.

Whenever a cluster is created, the symbols involved explode and cause the remaining symbols to drop down and the reels to be refilled. This can potentially create new wins.

An interesting thing to note is that the low-paying symbols award wins but don’t contribute to the fight portion of the game. Only the Win and Defeat Symbols count towards dealing damage.

The win value of each cluster is determined by the size:

To begin with, I should explain exactly how the game works. At the start, you get to pick 1 of the 8 available fighters. Then, the game picks a random opponent to fight. Here, the real game begins. We’re presented with the classic image of the two fighters facing each other but instead of controlling them directly, the playing field is added in-between.

Each fighter has their own health bar. The player has 65 health points while the opponent has 75. The bigger a cluster, the more damage it deals. If the player’s character loses their health first, it starts the Car Smash Bonus Game. If the opponent is defeated, the Beat The Boss Free Spins mode starts. Either way, all wins go to the player even if their character is defeated. The main reason to want to win the fight is that the Free Spins mode is far more lucrative than the bonus game!

The different characters have the following effects once their Wild Meter is filled:

The last thing to mention are the boss fights. When you defeat your opponent you start the Beat The Boss Free Spins mode. This part spins the reels for free but does not have a set number of free spins. It simply continues for as long as needed, until either you are defeated or all bosses are defeated.

This was easily the most beneficial part of the game, but it was also harder to win. Both characters have 25 health points which made it fairer and quicker. I never got beyond the second boss, Vega, but even then I made back my bet several times over.

I found Street Fighter II to be a slot that demands the player to stick around for quite a while to be lucrative. You can, of course, play a few quick rounds but it’s best if you can play for a long time since that increases the likelihood of getting into the free spins mode where the big wins are.

Street Fighter II is a worthy adaptation of the arcade classic to the slot experience. It is steeped in the original imagery, has all the familiar animations and music, and uses the same voice acting that most of us already know from back in the day.

With the ability to pick a bet between £0.20 and £700 per spin it’s possible to live life on the edge, but considering the high volatility, I would advise caution. The max. win of 7,142x your bet is sizable but you need to be aware that getting there is likely going to be a long journey.

If you don’t mind the cluster-based gameplay and the high variety of characters and wilds, you should definitely give Street Fighter II a chance. If you prefer classic slots but have fond memories of the original game, you’d do yourself a disservice not giving this game a try. Players that prefer simple slots and who have no nostalgic memories with this fighting game might do well to give it a miss, however.

Browse casinos with Street Fighter II™ and other slots from NetEnt. Create an account and try the game for free before making a deposit.

You can play Street Fighter II™ in English, Finnish, Swedish, German and 20 other languages. 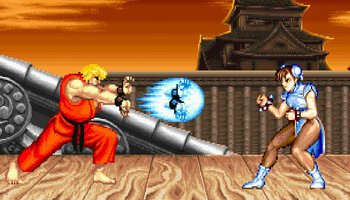 Street Fighter II is one of the weirdest slot games I've seen from NetEnt. The bonus game where you get to destroy a car is a fun little treat, but overall the slot tends to drain my wallet more quickly than I feel comfortable with. It's also quite hard to get to the free spins. But, it's still a fun slot especially for those who have played the original arcade game.