All of the retro slots out there make it known that fruits are good for you, but if you are into colossal, lunch-sized fruits, Strolling Staxx is the game you need to check out.

It appears to me that the designers of this slot at NetEnt have been heavily impressed by the artistic style of cubism. There is no other way to explain why every single fruit and card symbol in this game appears, well, to the third power. This game isn't all about the design, however, because I've discovered a funky style of gameplay that relies on colossal symbols and respins for the potential big wins.

The full name of the game is Strolling Staxx: Cubic Fruits. The name gives away another element - that landing a full 'staxx' of a symbol kind is followed by them 'strolling' on the 3x5 reel set for consecutive respins. With a standard free spins bonus being absent, this is probably the next best thing. Some 20 spins in I thought NetEnt had done away with the wild, which wouldn't be atypical of this studio, but thankfully, Strolling Staxx does have that symbol making a cameo here and there.

Did I enjoy the game? Certainly did so and I would recommend it to players who are into the peculiar balance of medium-variance slots.

I gave away the theme ahead of time, but there are some bits and pieces that are worth putting to the fore for the slots enthusiasts out there. First off, the designers have created a swell world of a flowing river, passing clouds and trees that sway their cube crowns on the breeze. It's a piece of work, this game, equally so in terms of design and gameplay. It is minimalist, yet it succeeds in creating a lively rhythm every time the big symbols and respins start coming around more frequently.

I especially like the way in which the colossal cubes spill into multiple symbols of the same kind. This trick is part of the extra feature, so it's been treated to some animation and a proper embellishment in sound. Speaking of, a musical theme is missing, but the mood is created by the gurgling of a brook, an airy ambience sound and some exclamations - just the thing to do to keep pace with the minimalist graphics.

Strolling Staxx is a game that comes with a buy feature of sorts, that you kind of want to have on at all times. The reason being, Bonus Bet enables the Extra Chance feature to activate whenever possible, so that colossal symbols that don't land fully on the reels leave behind symbols that can connect with other matching symbols on the reels.

Whereas buy features in most other online slots are usually quite expensive, Strolling Staxx makes its Bonus Bet affordable. If you are playing at the first bet level and your coin value is 5p, the bet per spin is £0.75. Having Bonus Bet on makes the bet marginally more expensive at £1.00 for the same coin value.

In terms of symbol values, I find the paytable to be rather modest as you aren’t going to find any symbols that exceed 500 coins or 33.33x your bet. Those that can pay this amount for five symbols on a payline are the wild and the ‘cube-er-melon’.

Strolling Staxx’ medium variance can be seen at work right at the get-go. The game is balanced quite well between standard payouts and those that can occur from any of the extra features. A greater share of the winning outcomes will consist of three and four of a kind royal cards, but on the other hand, the payout potential from the respins can vary immensely, from small to big.

There are a couple of caveats. It felt like my game fared a lot better when playing with the Bonus Bet on. The Extra Chance feature may not trigger frequently, but it can justify spending more on your bet just to keep that probability open. The RTP is just slightly shy of the average, at 95.98%, but the ten paylines don’t yield as many wins in the base game. And that’s why we have all those extra features in the backroom.

Browse casinos with Strolling Staxx: Cubic Fruits and other slots from NetEnt. Create an account and try the game for free before making a deposit.

You can play Strolling Staxx: Cubic Fruits in English, Finnish, Swedish, German and 20 other languages. 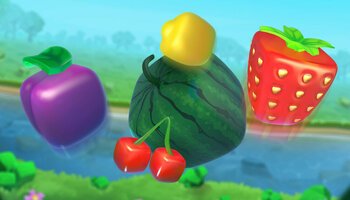