Sugar Pop 2: Double Dipped is the colourful sequel to one of Betsoft’s most popular slots. Featuring a huge playing field, enough sweetness to make you dizzy and a whole slew of features the game is sure to entertain.

The game was released in 2018 and the graphics fit the time. Where other Betsoft games have had disappointing looks, this one makes up for a lot. The symbols bounce and pop as they drop onto the screen, the big pump on the side of the 7x7 playing field fills up with liquids as the right symbols make winning clusters, and the free spins mode also includes a lot of movement.

With a playing field this large, Sugar Pop 2: Double Dipped doesn’t work with regular paylines. Instead, it uses the alternative Cluster Pays, counting wins based on the same symbols touching horizontally or vertically. When there is a win, the symbols involved explode and cause the symbols above it to drop down. This is usually referred to as Cascading Reels.

I was glad to notice the sound department didn’t drop the ball either, spicing up the game with a very fluffy sounding background song. It reminded me of different children’s shows, fitting the setting of land covered in candy and sweets. As the background of the game shows, we’re literally floating in candy-coated clouds.

To fill the larger playing field, the game has quite a large selection of symbols. Through the clever use of colours and shapes, these stay pretty distinctive, making it possible for the player to see any wins at a glance. The combination of the larger playing area and the cluster pays feature results in a Medium Volatility.

The symbols are all based on simple shapes, some resembling actual candy, others only looking like they might be. In effect, all the symbols are unique but considering their basic shapes it’s not such an accomplishment. I did like how all the symbols bounce as they drop down as well as explode when part of a cluster.

The coin value per symbol is very low but keep in mind that the minimum size of a cluster is 4 symbols, meaning you should multiply each symbol’s value by 4 to get an idea of how much the minimum win would be. That still makes the low-paying symbols seem very weak but at least there are some ways in which a player can come out on top.

It seems the developers of Sugar Pop 2: Double Dipped were feeling particularly creative when they made this slot as it is almost overflowing with features. To start with the basic ones:

These features are probably familiar to most people that have played similar slots, and even for new players, it will point itself out rather quickly. The game doesn’t offer a lot of information per se but the way it’s presented makes it clear what is happening. Clusters explode in an obvious way and the total coin win is projected on the screen as well.

There are a number of extra features at play, however, mostly to do with levelling up. You level up by gathering a number of Level Up symbols. The higher the level, the more of these you’ll need, increasing by 2 for every level. To level up from level 1 to level 2 you need 4, then 6, then 8 and so on.

Levelling up can grant you either a coin win or introduce a new symbol in the game. The list of upgrades includes:

Most of these special features are only unlocked at the appropriate level but don’t show up regularly. I made it to level 10 relatively quickly but even with 3 symbols unlocked I would spend a lot of time without any of them appearing. In the end, it didn’t really matter as most features work to destroy symbols, causing the remaining symbols to drop down and maybe create new wins. None of the symbols actually facilitate immediate wins themselves.

I think the number of features and special symbols might become quite overwhelming for even the most veteran players. At the same time, it does reward those that stick with the game for a longer time. To help manage your funds, players can pick a bet between £0.50 and £250 per spin.

If you were a fan of the original Sugar Pop, you’ll probably also have a good time playing Sugar Pop 2: Double Dipped. The game stays exciting, colourful and fun. The overabundance of candy might make some players feel a little sick, though, as it is rather unrelenting as well.

Players that favour more traditional games won’t find much to appeal to them here. The features are obviously intended to offer a unique experience, and the copious amount of different symbols almost make it a requirement to do some research in the paytable while playing.

That said, I did enjoy the game. The slot’s max. win of 1,960x your bet might seem somewhat low compared to other Betsoft games but I think the path to getting there is worth the journey.

Browse casinos with Sugar Pop 2: Double Dipped and other slots from Betsoft. Create an account and try the game for free before making a deposit.

You can play Sugar Pop 2: Double Dipped in English, Finnish, Swedish, German and 22 other languages. 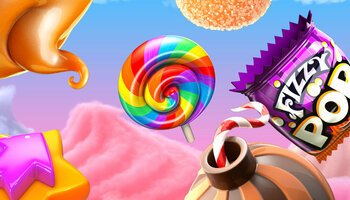