I'd attend a Sumo competition if I ever had the chance. This kind of wrestling looks amusing enough and doesn't involve any violence. In the Sumo Spins slot by Red Tiger Gaming, you can indeed experience the sheer weight of the sumo wrestlers who come in the shape of reel modifiers to bring about heavy winnings.

This is one of those Red Tiger games that doesn't include a free spins bonus but does everything else right. The game is quite good, despite the cartoon-like graphics. If not for that then players are definitely going to appreciate the mathematical model which warrants medium volatility and a pretty consistent payout frequency compared to the majority of online slots out there.

I liked the game because of the theme and the features, so slot players who are looking for reel modifiers that can trigger big wins, I'd say you need not look further than Sumo Spins. A layout of four rows and five reels comes with 40 paylines and the maximum win potential is 1,000x your bet, all of which boils down to a rather speedy and exciting-at-that online slot.

The playing field of Sumo Spins is the surface on which Japanese behemoths try to push one another outside the boundary. The symbols, on the other hand, include sumo wrestling paraphernalia, like the bucket and ladle that is handy in the steam spa, a hand fan with some Japanese characters and a bucket of talc that prevents slippage in the attempt of wrestling the opponent to the floor.

The part that is far more impressive than the symbols are the sumo wrestlers. These act as reel modifiers and wild symbols that can influence the outcome on the reel set on any spin. I enjoyed the sumo showdown because it is loud and causes the reel set to rumble in a lively manner. Ceremonial Japanese drumming adds a rhythmic motion to the reel adventure. In summary, the game design isn't wildly spectacular but it is entertaining and can hold your attention for long, as I can attest with my experience with the game.

As I said, the game comes with random reel modifiers that can tip the odds of landing winnings in your favour. None of the standard paying symbols are wild, so in order to see one influencing the outcomes, you'd have to wait for two or three Rikishi wrestlers to show on the reels at the same time.

My favourite thing about the game is that the hit frequency is narrow enough and avails any of the reel modifiers within a reasonable number of spin. While I can't pinpoint the exact number of spins it takes for any of the three to trigger, I'll just say that they do liven up the game quite often.

If you want to try the game you can make low bets (20p) and catch a glimpse of the extra features and see what they may mean to you in terms of upping the ante. I've played Sumo Spins with both small wagers and such that can be deemed substantial enough so as to make returns that are worth counting.

The symbol payouts aren't overly spectacular, in fact, I'd say they are more on the low side of as far as paytable structures go. It's a positive thing that there are five high-paying symbols and four low-paying symbols. The latter can pay between 4x and 20x your payline bet which translates to 1x your bet for the best outcome of five suits of the same kind.

On the other hand, the payout frequency and medium volatility have meant consistent payouts which in my experience didn't allow for my balance to droop too low before a reel modifier turns up. In most cases, the reel modifier has resulted in a winning outcome. In a few cases, these events can crop up multiple payline wins, especially with the rolling sumo wrestler feature.

I like the annotated win potential for the Sumo Spins slot. That figure is more than 888x your bet from a single spin, which for a medium volatility game is quite decent.

Sumo Spins is an online slot that is full of surprises. That is, four surprises to be exact, and each one can bring about a positive outcome. By far, the most desirable event on the reel set is Sumo Showdown which is where the game can reach the highest payout potential from a single spin.

I highly recommend the game, I don't think it's the most graphically-pleasing slot out there, but it is one that can hold your attention and give you a good ride for your money.

Browse casinos with Sumo Spins and other slots from Red Tiger. Create an account and try the game for free before making a deposit.

You can play Sumo Spins in English, Finnish, Swedish, German and 18 other languages. 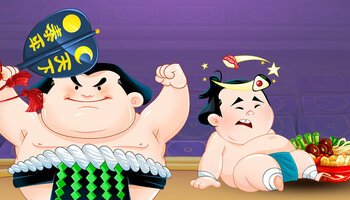