Super 7 Stars is a return to the classic slot machine with a few distinct adjustments, letting players imagine themselves back in an old-school gaming hall.

The slot is built to resemble an original type of fruit machine, except with a 5-reel, 3-row playing field and a whopping 30 betlines. This slot was developed by RedRake Gaming and released in 2016. The background places us in a gaming hall, surrounded by other slot machines all playing Super 7 Stars.

I liked how the slot looked, even though it was rather simple. There are no real original elements to the appearance of the slot, with many of the symbols based on the old fruit machines but they are drawn in great detail and all have their own animations when part of a win. It helped give the game some much-needed movement because everything else is static.

The sound is based on the same type of music you’d find at these gambling halls, with a lot of flash and electronic beeping. The base game itself only had a low rumble in the background as the reels spun, wins triggering a soft celebration song and only the bonus features really bring the music to life. I did like that a crowd calls out the number of special symbols on the screen to let you know you’re close to triggering it.

There are quite a lot of symbols in Super 7 Stars, but due to some rules on how wins are counted this brings it to a Medium Volatility. These are all based on the classic fruit machine with no real original input in how to represent them. The only thing I can say about them is that they are finely detailed and animated.

There’s quite a lot of symbols for a classic fruit machine, with 4 special ones that are associated with different features. On the other hand, it’s possible for different combinations of BAR or 7 symbols to trigger a win.

Even though Super 7 Stars looks classical, it has a number of features I would consider quite modern:

Each of the bonus features introduced in the game were rather rare but since there were 4 different ones they showed up often enough to keep things interesting. The normal Wilds were the most common but even those didn’t appear every spin.

Meanwhile, I found the Super 5 Stars symbols to be very rare and I never got a win, considering it has a value of 250x your total bet which makes it rather enticing to have. It would make sense for RedRake Gaming to keep it rare.

The Super 7 Star symbol, in contrast, was a little more common because the effect wasn’t as profound. This would simply expand into a stacked reel of Wilds that filled reel 3 and then trigger a re-spin, with the wilds becoming sticky. During my time playing that triggered a few bigger wins but would often only result in normal-sized payouts.

Finally, there are two special modes. The Bonus symbols trigger the Free Spins mode. Here the player is presented with a 5x4 field of question marks. The player picks a number of squares until they have 3 of a kind, establishing the total number of free spins they get to play with. After this, the free spins mode plays as normal.

The other special game is the multiplier wheel. Get 3 Spin symbols on the screen to activate this wheel, which will spin automatically. The wheel is covered in different multipliers between 30x and 20,000x the bet per line, so this is not the total bet you play with every spin. The amount is paid immediately after the wheel is done spinning.

All in all, I found the game to be a strange mix of resembling a classic slot and using a lot of its symbols but having a lot of extra features you wouldn’t normally find in a fruit machine.

Super 7 Stars is a slot with a split personality. The look and feel of the game are very much based around the old-school slots that many of us grew up within the old gambling halls. Meanwhile, the features are very modern and the sheer number of them stand in contrast with the vibe it gives off.

It makes it difficult to recommend the game to anyone. Players that enjoy a more modern experience will likely not feel very connected to the appearance. Classical slot enthusiasts at the same time might be annoyed or overwhelmed by the great number of different features and bonus games.

In total, I found the game to be a pleasant enough experience. The max. win of 417x your bet is not going to draw any players in, however. There are other slots with a more well-balanced series of features, as well as games that follow the classic slot gameplay more closely.

Browse casinos with Super 7 Stars and other slots from RedRake Gaming. Create an account and try the game for free before making a deposit.

You can play Super 7 Stars in English, Finnish, Swedish, German and 19 other languages. 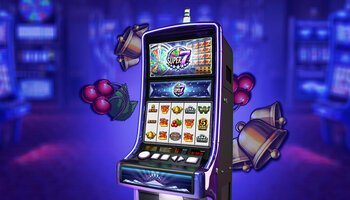