In this Fugaso’s slot, you’re a police officer who’s noticed a hacker trying to access some classified files on your PC. So, what to do? Call an IT guy? Nah, I’ve got a better idea - call the Super Hamster!

It’s not every day when you see a hamster running about in a police office. And, just to make things even weirder, the hamster also has a bazooka of a sort. Having absolutely no sense, the hamster is scanning the computers and blasting any of the Viruses released by the hackers.

For me, Fugaso is a bit unknown game supplier as I usually play slots made by NetEnt, Play’n GO or Yggdrasil. But, it’s fun to shake things up sometimes and try out something entirely new. Although, at first I thought Super Hamster to be a far older slot. It was a big surprise to learn that it was released in 2019 when the 3D animations remind me of some Betsoft slots from years ago.

In short, Super Hamster is an easy slot with some fun features. For instance, it pays both ways and has sticky Wilds. So, let’s see how the game feels, looks and runs!

The game is set in a small police office and the reels of the slot are placed inside a computer screen. The screen shows you a bunch of symbols, of which the most are common office items like scanners, printers and webcams. The hero of the game, Super Hamster himself, is standing next to the terminal and ready to catch those pesky Viruses!

Let’s start with the hamster. In my opinion, he looks terrible - like straight from a cheap kids show from the late twenties or early twenty-tens. The soulless gaze of it made me feel quite uncomfortable, but at least he moves a bit all the time, making the game look alive even when not spinning.

Every time the random Scanner feature activates, the hamster pulls out his tiny bazooka and blasts the Virus into a small, locked cage. Don’t ask me why he uses a bazooka and how can it work as it does. This is fun to watch the first couple of times, but after realising I couldn’t skip any of them, it became rather annoying.

The high-paying symbols are done well and fit perfectly to the theme. But, I can’t say the same for the low-paying symbols being just the suits. It would’ve been nice to see Fugaso going all the way and finishing strongly with the design, but maybe they ran out of ideas of what to place as low-paying symbols. Though, even just paperclips, pens, or other small stationeries could’ve worked well.

The background music is a fun little tune, not too distracting but not too catchy, either. Works well with the game, but doesn’t make any strong impressions.

Super Hamster is a slot game with five reels and three rows. However, instead of even number of paylines, this game has 26 of them. On top of this, the paylines go both ways.

The game has sticky Wilds as well as a free spin feature. The Wilds occur randomly and landing at least three of them simultaneously awards you with free spins.

The Viruses are Wilds which become sticky as the Super hamster puts them in a tiny cage.

Each Virus in their cage gets a small countdown box which tells you how many rounds they’re still going to stay put. When the countdown goes down to zero, the cage and the Virus inside simply disappear.

While the Scanner feature is active, you may not change your bet.

The Viruses triggering the free spins in the base game will stay on their places for the duration of the free spin round. Any new, occurring Viruses will also get sticky and without the countdown box, they’ll stay where they are until the end of the spins.

The free spins can not be re-triggered.

Fugaso’s Super Hamster was an interesting slot to plot and definitely had a theme like no other game I’ve played in a while. However, I don’t see myself playing it in the future. The gameplay is way too slow, the 3D animations will probably follow me into my nightmares and because it doesn’t offer me anything new.

Of course, it’s good to remember that I’ve played hundreds of slots and have an extensive game history. This means I already know what I like and dislike in slots.

For a player that’s new to online slots or isn’t too particular with the visuals, I think Super Hamster is a fun choice. It has medium volatility and an RTP of 96%, so it might not be as harsh as high volatile games. Plus, the sticky Wilds have the undeniable potential of creating paylines with truly massive wins.

Browse casinos with Super Hamster and other slots from Fugaso. Create an account and try the game for free before making a deposit.

You can play Super Hamster in English, Swedish, German, French and 7 other languages. 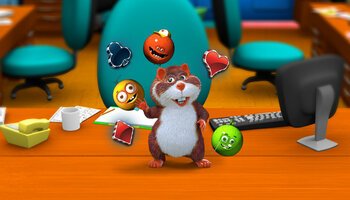