Super Heroes brings a team of heroes to the screen who are eager to defend the Earth from a wild pantheon of villains! Plus they might bring some wins to our pockets as well.

Developed by Yggdrasil and released in 2016, Super Heroes seeks to bring the current craze of superhero movies to the slot universe. With a team of 6 heroes that each bring their own features to the game as well as a whole mess of scary villains looking to conquer Earth, it’s sure to shake up the reels.

Speaking of reels, the game is built with a standard 5-reel, 3-row playing field. There are a total of 20 paylines. All the symbols are unique, though the card suits clearly inspired the low-paying symbols. There are different characters, heroes and villains, that appear at different stages in the game.

It all looks great. There is a futuristic city in the background, the characters look cool and the superheroes show up to use their special powers with unique animations. The theme reminded me of NetEnt’s Wild Worlds which has a more cartoony feel and more otherworldly features but also leans heavily on the superhero theme.

The soundtrack works to improve the setting, adding different voice lines to the different heroes as well as having an energetic song during the free spins mode. The song is a little quieter during the base game but still feels like it’s building to an epic fight.

All the symbols look futuristic and fit the superhero setting. The high-paying symbols are different alien villains while the low-paying symbols are stylized card suits. I found that a good compromise between using symbols people are familiar with but keeping it in line with the concept of the slot.

The symbols looked nice in my opinion, although they could have been animated a little more. When part of a winning payline they were highlighted by an energized box but the characters themselves didn’t move.

The game is set up largely like a standard slot. The reels spin and occasionally you activate the free spins mode. During the Free Spins mode, the 6 heroes all have their own special powers.

This was all very simple. What made it more interesting was getting to the free spins mode. When that happened, each spin 1 or more heroes would show up to use their power. The more often a hero showed up, up to 4 times, the stronger their powers became.

The heroes all have their own looks, voice lines and colour to make them easily distinguishable. The heroes can also show up randomly during the base game, adding their power to the reels once but not getting a higher level.

I found these features to all be very entertaining. The heroes have fitting animations to explain how the features work, as well as having a real impact on the game. The free spins mode was regularly a huge boost to my funds. You can pick a bet between £0.20 and £100 but even on the lowest bet, I felt I was still getting a nice return.

The Medium Volatility felt good, not only because the semi-regular wins but also because the amounts were great. I didn’t see a real decline in my funds for a long time and the free spins helped with that. Be aware that since it’s a slot, it’s not a guarantee!

Super Heroes has a simple name but isn’t a simple slot. Even as it’s getting up there in years the graphics, sound effects and design still keep up with newer games. It’s a very energetic, high tempo game that grabbed me and didn’t let go. Seeing the different heroes use their powers to create big wins was very satisfying, as well as watching their powers get progressively stronger.

I think both players that are looking for something modern as those that look for something classic can get their fill. The game looks very good but the features it uses aren’t anything most players haven’t seen before. There is a lot happening on the screen but I didn’t think it detracts from the playability.

With a max. win of 64,000x your bet it should give everyone a reason to try it, even if these other reasons don’t appeal to you.

Browse casinos with Super Heroes and other slots from Yggdrasil. Create an account and try the game for free before making a deposit.

You can play Super Heroes in English, Finnish, Swedish, German and 18 other languages. 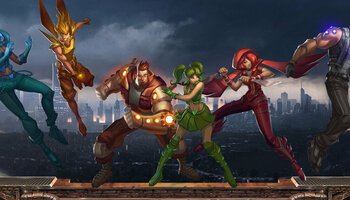