Super Hot by Zeus Play lets us see how food in the barbecue acts as the reels spin and the different items disappear onto the grill. With simple gameplay that is amplified by multipliers, Super Hot offers players a familiar experience.

Created and released in 2015, Super Hot came out during a busy time for the small studio. Where other slots made by this developer were rather simple looking and were plagued with a lack of theme and setting, Super Hot comes at it from another angle. This game takes the barbecue idea and runs with it!

The symbols in this 4-reel, 3-row slot are all presented to be part of the barbecue experience, with the background made to look like the inside of an actual grill. I must say that everything looks excellent with all of the symbols drawn in high detail and each of them unique. Why they couldn’t do this for the other slots that were released at the same time I can only guess at.

For once, the soundtrack isn’t completely awful either. It plays an upbeat rock song with a distinct electric guitar. Unlike their other slots, the music doesn’t fade in and out with every spin but keeps playing and adds to the atmosphere.

When it comes to the symbols used in Super Hot, the creators stayed close to the source material. This means a lot of different vegetables and burgers as well as cutlery to eat everything with. When it comes to animations they, unfortunately, stay rather static, only moving when they’re part of one of the 25 bet lines in the game.

Players can choose a bet between £0.25 and £37.5 per spin, which lets them decide the risk they want to take with this Low Volatility slot. The symbols in the game are:

There aren’t a lot of different symbols which might explain why they seemed to put more time in the design than with other games. Most of them are unfortunately also low-paying, with only 3 of them really offering multitudes of your bet when part of a win line.

Super Hot is a very simple slot. Besides the usual spins there is only one feature worth mentioning:

This feature only appears when the same symbol fills the entire playing field. Although the slot is smaller than most other slots it still requires the same symbol to appear 12 times, which is extremely unlikely. I did get close a few times but I never hit the multiplier.

When the highest paying symbol fills the screen, players can get a max. win of 1,200x your bet. The game plays as if there is no special feature and the entire game plays like a bare-bones slot. As a result, I found my funds to drop rather rapidly as I went and there was never any big wins to bring back my coin total to where I started.

Super Hot by Zeus Play feels like wasted potential with its excellent graphics and nice music but absolute lack of any features. Even Wilds might have given the slot some more personality but as it stands it is the most basic slot, probably only suited for people that have never played a video slot at all that wants to be introduced slowly.

I think the graphics were really good and they stand out compared to the other slots that the developer released in the same year. The symbols look good, the background suits the theme and the whole thing has its own personality.

Unfortunately, there isn’t anything to be found here that will give any type of player much entertainment. Other, better slots can be used to introduce new players that also have some more features.

You can play Super Hot BBQ in English 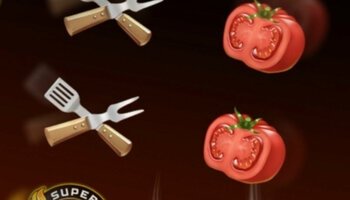