Super Striker is the slot for those football fans that look for the most talented, forward players. The ones that make the best goals and the biggest wins!

This slot was developed by NetEnt and released in 2020, potentially showing off the pinnacle of what their team is capable of! Unfortunately, the game sticks close to the ground and doesn’t really offer much to cheer for. Still, it might appeal to a select group of players.

The game has a 3-reel, 3-row playing field with 5 paylines. This makes the slot feel rather small, especially compared to most other NetEnt games. Then again, there is always going to be a group of players that enjoy this type of gameplay which reminds us of the old-school fruit machines.

If the name didn’t give it away, Super Striker is a slot based around the football pitch, populating the reels with footballs, goals and players. The graphics look fine but nothing spectacular although the symbols are animated when part of a win. The background shows us the standard football field and a crowd, creating the illusion we’re part of the audience as we watch a thrilling game of football.

It all looks fine but unfortunately, it didn’t blow me away. In that sense, it reminded me of another NetEnt football game with the original title Football: Champions Cup. This game was released in 2016 and seemed to have been developed to coincide with the European Cup. It also uses the football theme but doesn’t really do anything interesting with it, unfortunately.

Super Striker uses a set of original symbols to fill the reels. They are from highest to lowest:

The different symbols are easily differentiable, even when there is a gold and a regular version for each symbol. The combination of different shapes and colours really helped in keeping them apart.

The Goal symbols can mix and match, meaning that getting a Triple Goal, a Double Goal and a Goal symbol on a winning payline will result in a win. It will use the lowest of the Goals to calculate the value, of course.

Super Striker has only a small set of features to complement the base gameplay. With its 3-reel, 3-row playing field there isn’t a lot to add.

The Bet Slip feature is something that NetEnt has introduced before in the horse racing slot Scudamore’s Super Stakes. This feature allows a player to place an amount of money on a certain outcome regarding the appearance of a symbol in a set number of spins. When successful, the player receives a payout. If not, the money is lost. I found this feature to be very forgettable and only used it once to see how it worked, but unlike in the horse racing game, it felt very disconnected from the rest of the slot.

The Golden Scatter was a rare sight indeed, and even when it did show up the random coin win would be rather disappointing. The only good thing about it was that it helped in getting the free spins mode to activate.

The Free Spins mode finally triggered relatively often for me. It uses the word Free Spins but doesn’t really resemble a normal Free Spins mode since it replaces all symbols with the Golden Scatter symbol. The playing field starts off empty as these symbols drop down, randomly attaching themselves to the reel. If this happens enough to fill the playing field before the Free Spins are depleted, a new round starts with a higher multiplier. Otherwise, the total win is calculated and awarded.

I found the features to be pretty simple and basic, but considering the High Volatility they did help in getting some bigger wins. Even playing at the minimal bet value, which players can pick between £0.10 and £75 per spin, I would end up with dozens of times my bet after a free spins portion.

Super Striker is a basic slot by NetEnt that is, unfortunately, becoming more common. The graphics look fine, the music is alright and the features are satisfactory but also rather bland and uninspired. The idea of a football slot is great as it allows a lot of creativity and the introduction of different bonus features, but Super Striker does none of that.

Instead, it offers a rudimentary experience that will mostly appeal to players that enjoy the classic slot experience. The features are simple enough not to disrupt the base gameplay and I’m sure there will be players that consider the Bet Slip feature to be its most appealing factor.

With a max. win of 500x your bet it is on the low side of rewards, coupled with the high volatility making this slot more something to play if you’re a football fan than if you’re looking for any big wins.

Browse casinos with Super Striker and other slots from NetEnt. Create an account and try the game for free before making a deposit.

You can play Super Striker in English, Finnish, Swedish, German and 20 other languages. 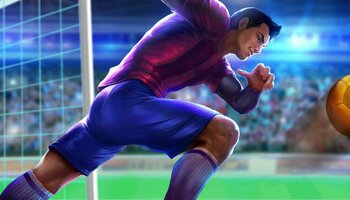