Summon every bit of strength you got, because it’s a jungle out there. And quite literally too, since you’re the newest competitor at the popular reality show Survivor! In Big Time Gaming’s slot Survivor Megaways, it’s not enough to strike deals and plot your way to the group of finalists. You also need to collect mysterious Urns to really make it rain gold!

The exotic surroundings of TV-show Survivor is the setting of this slot, published in 2020 by BTG - the pioneer of Megaways games. If you’re unaware of Megaways slots, then you’re in for a treat; with Megaways slots you could have as much as hundreds of thousands of ways to win. Patented and licensed, the Megaways feature can nowadays be seen in other suppliers games as well. Of these, the most known being NetEnt and Red Tiger.

Survivor Megaways is an interesting game and sure to attract the fans of the well-known reality show. At least, Big Time Gaming managed to come up with a nice way to implement the idea of red and blue tribes by making them into red and blue Wilds.

So, grab your torch and put on your buff - it’s time to start the show!

If you have played any of the BTG’s slot games before this, you should already be familiar with their usual looks. I don’t think they have updated their UI since they started producing games and this, sadly, shows. The graphics of the game look like they’re from a much older slot. On top of this, they didn’t even bother to design any new low-paying symbols - just used the exact same ones used in Bonanza and Book of Gods.

However, I do like the background music. It’s the familiar theme tune from the show and I would gladly listen to it while playing. Too bad they added a bunch of quite annoying effect sounds, and the sound playing while waiting for the third Scatter is a horrible, comical wailing.

I have noticed BTG using a lot of old material in their new games. I guess this is one way to cut the expenses but is it really worth it? I would very much like to say that I love the graphics and the sounds of Survivor Megaways. Alas, I can not.

The game area is a bit complicated unless you're familiar with Big Time Gaming's other slots with the same style (like Bonanza Megaways). The easiest way to understand the view of the reels is to see it as 6 vertical reels, which then are split from the middle by a horizontal Extra Reel.

The Extra Reel adds one extra symbol to the reels 2-6. Because of this, the first reel can hold up to 6 symbols, as the remaining reels can hold 7.

Survivor Megaways can have a maximum of 100,842 ways to win. The non-fixed paylines depend on the number of symbols, which can change with each spin. The game also has cascading wins, meaning that the winning symbols are removed from the reels and new symbols are then added. In addition to the normal symbols, the slot has Wilds, Scatters and Urns.

For example, if the reels have a large blue Urn and one or several blue Wilds, the Urn adds x3 multiplier to all blue Wilds. Red Wilds stay as they are. After this, the blue Urn is removed from the reels.

If an Urn doesn’t have a matching Wild on the reels, it stays where it is if, or until a Wild sharing its colour appears.

In the base game, the Wilds get reverted to x1 when there are no more winning combinations.

I myself did watch some of the early seasons of the actual show and was quite enthusiastic learning BTG was making a slot with the same theme. Even the old-looking graphics weren’t enough to scare me off since I had gotten used to them with BTG’s games.

Survivor Megaways has some interesting ideas, of which it very successfully combines with the cascading wins and Megaways features. Everything lies with chaining the wins and gathering enough multipliers, preferably during the free spins. This, of course, is way easier said than done! Even when I managed to enter the free spin round, the Urns increasing the multipliers were usually nowhere to be seen. And, when I finally had some multipliers gathered to both of the Wilds, the free spins ended.

This wasn’t the first time BTG had done a slot game based on a reality show. Who Wants To Be A Millionaire was released in 2018 and Who Wants To Be A Millionaire Mystery Box in 2019. They were quite okay and well done, despite the same old UI. But, I’m not going to lie, Survivor Megaways was still a mega-sized disappointment. I honestly expected better graphics and animation, and more investments and got yet another game that looks just like the old slots from BTG.

Anyway, if you like Megaways slots, I guess you could do worse than Survivor Megaways. But, you could do far better, too. Like, Gonzo’s Quest Megaways that actually looks as modern as it is.

Browse casinos with Survivor Megaways™ and other slots from Big Time Gaming. Create an account and try the game for free before making a deposit.

You can play Survivor Megaways™ in English, Finnish, Swedish 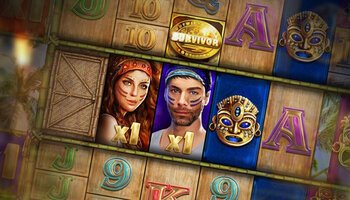