What do you get when you combine candy and magic? Sweet Alchemy of course! Grab a seat and read more about this unique slot. Today I’m taking a look at this game from Play ‘n Go that is rumoured to be highly divisive. With a ton of features and a pretty modern take on slots, it’s not hard to see why.

Sweet Alchemy came out in 2018 and consists of a non-traditional layout with a 5x5 playing field. However, the maximum possible payout of £300,000 is definitely something to consider when deciding whether or not to give this slot a try.

Personally I think the game looks great. Very colourful symbols, a nice animation that plays when the next spin comes down, and a lot of random details whenever you get winning combinations.

There are also a bunch of details hidden on the outskirts of the game if you look for them. Additionally, a lot of the graphics are used to keep you up-to-date with what’s happening. With so many features, these extra graphics help a lot.

Sweet Alchemy comes with bubbly, fantastical music that fits the theme well. It reminds me of the classic fair music you hear at the merry-go-round and the bumper cars. The music doesn’t really change or alternate at all during the game, no matter if you’re playing the base game or hit the free spins feature.

One thing to note is the alchemist girl that is voice acted. Although I appreciate the effort, and it helps to give her some character, the voice that’s used feels a little off. She sounds like she’s pretty bored with what she’s doing. It also sounds like the quality of the recording is not up to scratch with the other sounds in the game.

The Sweet Alchemy slot does a ton of things differently to regular slots so let’s not waste time and get stuck right in.

The biggest difference is how Sweet Alchemy uses a 5x5 playing field instead of the usual reels. This means that instead of looking for three (or more) in a row, you’re looking for clusters of 4 or more of the same symbols. In general, it reminds me of the game Bejeweled or the more famous Candy Crush.

First a quick rundown of the different symbols:

Your goal during the base game is to get combinations of 4 of a kind or more. Not just because they award you with a payout, but because you also unlock extras. If you get 6 matching symbols, you gain two Random Wilds on the screen. Get up to 13 and you gain 2 Striped Wilds. When you manage to get up to 25, it adds 2 Dotted Wilds to the screen. Finally, if you get 38 you activate the Mix the Elixir free round.

The Mix the Elixir free round extends the playing field to a 9x9 grid. The game continues largely as normal except now you’re collecting blue ring and gold star symbols too. Manage to get enough and you increase your bonus up to a maximum of 3. Afterwards you get sent to the final step of this free round: the Elixir of Power. This feature is the most fun and appealing, but also the most confusing.

The Mix the Elixir free round has some extra features:

Elixir of Power lets you pick your own multiplier to what you’ve won so far during the Mix the Elixir round. However, you do this blindly. Click on a field with chocolate squares to show the elixir behind it. Get three of the same elixir and you gain that multiplier. This can go from 3x to 10x. The more bonus you collected during Mix The Elixir, the higher the multipliers.

If it sounds complicated, that’s because it kind of is. That’s why the game starts you with a ten-page tutorial giving you a step-by-step walkthrough of the process. Although I appreciated it, it might’ve been a sign that the creators were going a bit overboard.

Nonetheless, after I played a little bit I understood what was happening. The last feature to discuss is the map that you can explore as you play along. After you get a Mix The Elixir round and you make it to the Elixir of Power stage, it’ll move you along on the map. Here you can collect extra wilds and payouts consisting of 15% of what you’ve won before.

Sweet Alchemy is a pretty messy slot. It looks good and I like the soundtrack. Unfortunately, it is jam packed with features, which causes it to feel bloated. I managed to stick with it and get a grasp on the different things that were happening. But if you’re looking for a simpler, more classic slot this is not the game for you.

This game has a high volatility so it can take a while before you get a win. However, getting to the Mix the Elixir free round is a good way to get a large number of payouts.

I probably wouldn’t recommend this slot to the average slot player; Only those people that are looking for something completely different from what they’re used to will get any enjoyment out of this game.

Browse casinos with Sweet Alchemy and other slots from Play'n GO. Create an account and try the game for free before making a deposit.

You can play Sweet Alchemy in English, Finnish, Swedish, German and 30 other languages. 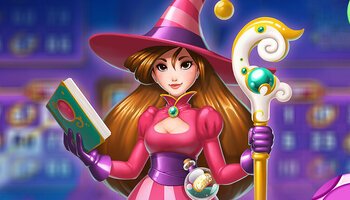 Don't actually like games which has 9x9 grids, but this gave me a couple of wins on first 10 rounds. Not my favorite, but I bet that some people find it very entertaining.

Gemix is more fun than this, because of supercharge wins which I have hitted a few times. Maybe I still give Sweet Alchemy a chance some day.