Take a retro-themed slot, put it inside a retro American diner, and voila! you have a nice little game that can trigger instant bonus cash prizes and payouts of up to 1,620,000 coins.

First off, that figure above is something that can occur as a statistical possibility and the odds at that full payout are extremely rare. But this isn't to say that Swipe and Roll can't turn up some appetizing wins. The game has two wild symbols of which one comes with a 3x win multiplier and one of the extra features can canvas the better share of the reel set in multiplier wilds.

Thus far, it's a promising set of features for a game of three rows, five reels and 20 fixed paylines, but I like it a lot that it doesn't stop there. NetEnt has thrown a couple of more surprises in the form of the randomly-triggered Coin Wheel feature and a bonus feature that gives the game its name.

I would love to say that the game comes with a perfect array of features, but there is a paytable whose payout structure underwhelms, for the most part. A low to medium variance doesn't quite cut it for those who pursue bigger thrills from a slot game, but I wouldn't get hung up on that.

Swipe and Roll has its place under the sun amidst scores of retro and fruit slots whose gameplay features and graphics fail to impress, so I hope that some players will at least try it and get to see what the up and down arrows can do in the bonus feature.

I am not sure whether the reel set is meant to represent a jukebox but it surely has that semblance. You can feel the 1960s Americana all over the game, but I think NetEnt could have found an actual photo of the inside of a classic American diner, to serve as a background.

But that's less important than the fact that Swipe and Roll can be so much fun. Even though the reels are filled with the kind of symbols I've seen across dozens of games, NetEnt have polished them just enough so that they appear more original and less recycled.

You aren't going to see much animation in the game, although the symbols that comprise the winning outcomes are given a particular radiance, with the payline flashing rapidly until you spin the drum again. The music is quite alright, much to my pleasant surprise, as it's a full rockabilly song. It’s quite possible that it was performed live just for our playing pleasure.

OK, I get it why NetEnt wanted to cap the high-symbol payouts at 300 coins - the multiplied wild landing in multiple positions for a respin could crush the house. But that's a rare thing to see, so the player is left with the best outcome of a decent 15x your bet for five watermelons. Move down a couple of notches on the payout structure and you get 1x for three of the same symbol.

To be honest, I did expect more, at least from the set of high-paying symbols because the set of royal cards just ain't cutting it by paying between 0.15x and 0.25x for three of a kind. Thankfully, Swipe and Roll can offer two favourable circumstances: few extra features and 20 paylines that can capture multiple payline wins from the same spin. Also, the theoretical RTP is 96.35% which is at least above the average.

I’ve played my share of retro slots and most have one or no extra features. Swipe and Roll has a few and that’s the factor that can invite any slots player to give the game a try. Like I said, symbol payouts on their own are surprisingly low, but NetEnt is giving players a fighting chance with the help of the wind multipliers and the possibility of landing a big instant win from the bonus game. My impression with Swipe and Roll is positive, but it isn’t a game that I’d go back to any time soon.

Play Swipe and Roll for free

Browse casinos with Swipe and Roll and other slots from NetEnt. Create an account and try the game for free before making a deposit.

You can play Swipe and Roll in English, Finnish, Swedish, German and 20 other languages. 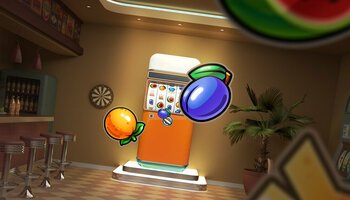