Sylvan Spirits has a wide selection of forest animals that appear in front of us as we explore a hidden and magical forest. The slot holds some beautiful graphics as well as a series of features such as free spins, multipliers and scatters.

Developed by Red Tiger, the studio released the game in 2020. I found that the graphics don’t hold up particularly well when compared to other slots, with the colours and details looking a little muted. Not that the symbols in the 5-reel, 4-row playing field are necessarily ugly, they just don’t look very impressive. I did like that the symbols are somewhat animated, including the low-paying symbols.

The background displays the mythical forest itself, with floating crystals that are embedded with runes. I’m not sure what it is meant to convey but the general appearance is quite good. Whenever there’s a win, the tiles are highlighted even as the reels are still spinning. Getting a Free Spins symbol will cause the remaining reels to take a little longer. In total, players can make use of 1,024 bet lines to get a win, using the consecutive reels feature.

Sylvan Spirits has High Volatility due to a number of reasons, including a large number of symbols, the lower payouts and the lacklustre features. Although this could all combine to create a huge win, getting the slot to actually do this prove to be almost impossible. During my time playing, I found my funds to go into a steady drop and never get out of it. Even when I hit a larger win it wasn’t enough to get me back to the starting point.

To deal with the volatility somewhat players can pick a bet between £0.10 and £10 per spin. Even with the highest bet, this means that the risk is somewhat mitigated. There is a max. win of 7,500x your bet which is quite high but it feels almost impossible to get that.

The payouts are extremely low, even with the maximum five-of-a-kind wins only 3 of the symbols will award you more than your initial bet. The game assumes that you will always get multiple winning paylines at a time and even though that did happen frequently, it didn’t happen often enough to make back your spins.

When it comes to the features, Sylvan Spirits doesn’t have too many and they aren’t very complicated to understand. The Free Spins mode doesn’t play a big part in the gameplay as it only triggers very rarely but it can create some bigger wins thanks to the colossal wilds.

The Free Spins mode was something that would look good on paper but because it never appeared it lost its value. During my time playing, more than an hour, I only activated it once and although it resulted in a rather large win it wasn’t big enough to compensate for the losses up to that point.

During the free spins mode, it’s possible for a 2x2 colossal wild to appear on the screen. Even though I did see it pass by as the reels spun a few times, it would almost never stop on the screen. This would make it yet another feature that was essentially pointless and might as well not be included.

The multipliers feature only works when the list of symbols at the top of the screen is activated, choosing a random symbol to apply a multiplier to it. If the game showed a win with that symbol on that spin it would apply the multiplier but considering the low payouts, even a 5x multiplier wouldn’t do much.

If I had to sum up Sylvan Spirits, I would probably call it lacklustre. It has some okay graphics that will probably age well but never make a lasting impression. The setting and style of the game are pretty generic as it feels like the studio went for the safest route.

The features are in between annoying and inconsequential, triggering very rarely and even when they did they would have almost no impact on the end result. Because of this, it didn’t feel like the game was really playing with features. Activating any of them felt more like a mistake than something the player is meant to do.

If you enjoy a generic slot with no real distinguishing features, but you like to be surprised by an occasional feature you forgot was there, this slot might be a nice surprise. By not expecting any features to activate, it might actually be a welcome surprise when it does show up. For everyone else though, there are far superior games to choose from.

Browse casinos with Sylvan Spirits and other slots from Red Tiger. Create an account and try the game for free before making a deposit.

You can play Sylvan Spirits in English, Finnish, Swedish, German and 23 other languages. 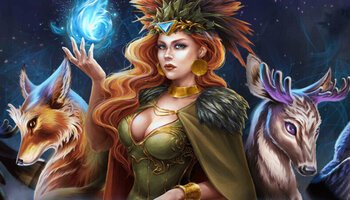