Taco Brothers Saving Christmas takes place in a sleepy Mexican town where tacos have been outlawed and Christmas has finally descended. The game features multipliers, Free Spins and Walking Wilds.

Just like its predecessor, Taco Brothers was Taco Brothers Saving Christmas created and released by Elk Studios. This new edition came out one year after the original, in 2016. In many ways, both slots are the same. This one also features a 5-reel, 3-row playing field with 243 paylines. The major difference in regards to this slot is that it is set during Christmas, with the expected changes to its art.

The game still takes place in the same Mexican town, including the same art but this time covered by a small layer of snow. The playing field also shows snow continuously dropping down the screen, while all the different symbols are modified to reflect the setting. The cactus is decorated with Christmas lights, the different characters are holding gifts or wearing Santa hats. They’re all rather small changes but they help reflect the mood.

The music also got a slight update, this time sounding like a lazy Mexican song with some Christmas vibes. I thought it was a clever mix on the theme, connecting the theme of the previous slot with the new setting. The other sound-effects are still the same, as far as I can tell.

The symbols in Taco Brothers Saving Christmas are still the same as in Taco Brothers, including their coin value for each. This game has the same Medium Volatility and a max. win of 1,500x your bet as the original. I generally don’t mind a rebranding of an existing game but it does feel like a bit of a lost chance at creativity.

I think the symbols look great, and I thought some of the changes to fit the Christmas theme were clever. It’s just a little unfortunate that, instead of creating something new, time was spent to basically create a simple rebranding of a slot that was already good.

The base game features Wilds but the main part are the 243 Ways To Win. As most people will probably know, this means that whenever the same symbol appears on consecutive reels from left to right they will count as a win. There are no specific paylines that you have to worry about.

If there are 3 Scatter Symbols on the screen the Free Spins mode starts. This doesn’t play with a set number of Free Spins but depends on something happening during this mode to decide when it ends. During the Free Spins mode, Walking Wilds are added to the screen, starting on reel 5 and moving to the left.

The 3 brothers appear on the screen, starting on row 3 and going up to row 1, each of them dropping 1 Walking Wild when they appear. Whenever all Walking Wilds have disappeared off the screen the Free Spins mode ends. There is also Captain Diaz, the bad guy, who will appear and lock up a Walking Wild. If all Walking Wilds are locked up, the mode similarly ends.

The last special symbol during the Free Spins mode is the Senorita, who appears to let the Brothers out of their cell. Even when they aren’t locked up they will send the Walking Wilds back to reel 4 so the player gets some additional free spins.

As with the original game, I found the features to work well and offer a nice change of pace. The game doesn’t require any input from the player except pressing the spin button. Players that prefer a simpler game might consider giving this slot a miss, but I think most casual players will have a good time.

Taco Brothers Saving Christmas is a good slot just like its clone Taco Brothers. Apart from some different art on the symbols and the background, and a slightly updated soundtrack, the games are identical. I wouldn’t call it a detriment either since some players might simply enjoy the Christmas setting more. However, it also means there isn’t much I can say about it that I didn’t already say about the original slot.

Players that enjoy classic slot machines won’t enjoy this game a lot since it’s straying rather far from this type of gameplay. The characters are whimsical, there are a ton of animations that take the speed out of the game as well as the different features that interrupt the gameplay. On the other hand, I imagine both players that like normal video slots and modern players will like the game for all the same reasons.

If you want to play the game for any big wins, I would probably not recommend it. During my time playing, I noticed my funds to never drop below my starting level but they also never went very high over them.

Browse casinos with Taco Brothers Saving Christmas and other slots from Elk. Create an account and try the game for free before making a deposit.

You can play Taco Brothers Saving Christmas in English, Finnish, Swedish, German and 18 other languages. 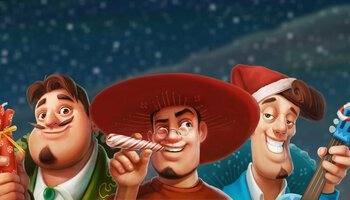