Taco Brothers follows the adventures of 3 brothers dedicated to bringing justice to a sleepy Mexican town where tacos have been outlawed. The game features walking wilds, re-spins and a free spins mode.

This game was released by Elk Studios, showing off their ability to come up with funny characters in a cartoony setting. Released in 2015 this slot stands in start contrast with other Elk Studios slot released in later years which show markedly less originality or creativity.

Taco Brothers has a 5-reel, 3-row playing field with 243 paylines. The symbols are all original and fit the theme, as well as being animated to a larger or lesser degree. Especially the 3 characters, the Taco Brothers themselves who play a prominent role in the gameplay. They all have their own colour scheme, design and animations. I thought this was an excellent way to differentiate the three and give them some character.

The sound design of this slot feels a bit toned down compared to the very extravagant style of the images. That’s not to say it’s bad, the different features all have their own sounds and a lot of what we see happen on screen has its own sound-effect. While I was expecting some more Mexican-style music, the game opted not to use that too much.

The symbols in Taco Brothers look really nice, especially when considering this slot is getting older. The graphics are sharp, the symbols are almost all animated and there’s a lot of movement in the background as well.

Even though the game has such a low payout for even larger paylines, the slot still has a Medium Volatility. This is partially due to the low number of different symbols, making it easier to get 3 or more on a win line. The other factor is the special features, including the re-spins and the free spins mode.

Taco Brothers has a bunch of features that augment the gameplay both during the base game as well as during several special features. The different features include:

With 243 Ways To Win, the game lets the player get wins a little easier, although I still didn’t think it was especially common. It was likely for more than 1 payline to hit at the same though, plus there were often four or five-of-a-kind wins at well. In general, I found the base game not to really help me in increasing my funds but it wouldn’t drain them very fast either.

When there are two Wilds on the screen the player gets a Re-Spin. This makes any Scatter Symbols sticky and gives another spin to see if this triggers the Free Spins mode. If there are any regular wins they are of course also awarded.

The idea of the Free Spins mode is that the three Taco Brothers attempt to escape the prison, starting with a Walking Wild on reel 5 and making their way to the left. From row 3 to row 1 a different brother is added to the screen and starts as a Walking Wild.

In my experience, the Free Spins mode was always pretty lucrative. Especially when a 2x or 3x multiplier was active the total coin win was often huge. Overall I found my funds to stay pretty steadily around my starting point, with the occasional increase. I never really lost a lot of coins that I didn’t make back later, but I didn’t bet very high either.

Taco Brothers is a great advertisement for Elk Studio’s potential at making good games. Unfortunately, as I played newer slots made by this developer it seems they have moved away from these sort of high-quality games. Instead, their newer games are in many ways less than what Taco Brothers promised.

That’s really sad since this game has a ton of animations, beautiful art, interesting features and generally fun gameplay. I wish this had become just the first of many but unfortunately, it seems this was rather an exception.

Players that enjoy a classic fruit machine probably won’t enjoy Taco Brothers a lot. It’s too silly with too many things that detract from the core gameplay. Anyone else, from casual players to modern slot experts, will probably get something out of it. The game lets players pick a bet between £0.10 and £50, with a max. win of 1,500x your bet.

Browse casinos with Taco Brothers and other slots from Elk. Create an account and try the game for free before making a deposit.

You can play Taco Brothers in English, Finnish, Swedish, German and 18 other languages. 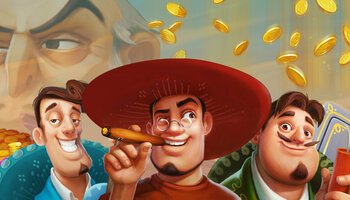