The gods are watching as you start your journey to collect the treasures of Olympus. Be in their favour and win big.

Take Olympus, as the name would suggest, takes you to ancient Greece. The Greek gods are following your every move and grant you boons if you are worthy. The gods play a huge role in the slot, so much so that they seem to steal the show.

The major selling point in Take Olympus is the Cycle of Gods feature. It gives the game an interesting rhythm where big things happen after every 10 spins. It is the focus of the game in both good and bad. It takes away from the actual wins and makes you care about what might happen.

Take Olympus was developed by Betsoft and it follows their familiar pattern. The game is gorgeous, sounds great, has interesting mechanics but still isn’t perfect. Even with such great features, it is surprisingly hard to actually win.

Like many of Betsoft’s slots, Take Olympus looks and sounds simply great. The theme is properly utilised and everything works together like a charm.

In a way, the game does seem a bit boring, as we have seen these gods in so many other slots. This time though, the mechanics and characters work really well together. I wasn’t even bothered to see the same faces once again.

The music has a cinematic touch with a slight superhero vibe. It wouldn’t be that hard to slap a Marvel logo over this and just change the characters. All and all, the game sounds great, the sound effects have some real weight behind them and it all comes together seamlessly.

Betsoft put a lot of thought into the symbols and came up with a great design. No more card suits or numbers, but rather thematic icons that are relevant to the game.

There are ten symbols in the game. Each god has a high-tier symbol and a low-tier symbol, which are important to that particular god during their turn on the Cycle of Gods. That cycle is the big draw of Take Olympus and the backbone of the entire game.

The Cycle of Gods is an ever-present feature, where one god is always watching you. For 10 spins, you collect that god’s symbols and at the end of the cycle, you get a gift from that god. Everyone has a unique gift and a new god is then chosen at random.

Zeus is the obvious outlier here, as he is not part of the cycle. Zeus is a wild symbol that can activate his own feature. It is a powered-up mix of all the other gods boons that plays out as 10 free spins. It is extremely valuable and is the best way to get big wins.

Speaking of winning, let’s talk about the elephant in the room. Like many of Betsoft’s slots, Take Olympus suffers from unbalanced wins. It is hard to hit anything, let alone anything good. The boons are nice, but even they alone won’t save your bankroll. It’s basically Zeus or bust in the long run.

The regular symbols are pretty worthless. To win anything during the regular gameplay, you need to hit multiple paylines at once. With non-wild symbols, a single payline can be worth double your bet at best, and that ain’t much.

The biggest and most interesting feature of Take Olympus is the Cycle of Gods. For 10 rounds, one god watches over you and at the end of it, they give you their boon.

During a cycle, you collect that god’s symbol, both low and high-tier version, and the more you get, the better the boon will be. Every god has a different gift for you and each of them can be great.

When a cycle ends, the god’s gift is given and a new random god is chosen. The same god can’t appear twice in a row.

This is hands down, the best thing about the slot. Collecting those symbols and seeing how it all builds up to one big spin is thrilling. I was more interested in the cycle than I was of regular wins.

Apollo shoots arrows and hits his own symbols. Each of those places are marked for the duration of the cycle. In the end, every marked square will be turned into a wild.

Hades has a counter on the side of the screen and his symbols increase the tracker by one. That number will be your win multiplier for the last spin of the cycle.

This boon is the worst in my opinion. It doesn’t guarantee a win and you can just end up with a losing spin with a huge multiplier. You can win big with Hades, but it’s so easy to just lose.

Poseidon has a counter, which counts how many of his symbols you have collected. At the end of the cycle, you will get that many free respins. The counter doesn’t increase during those respins.

Zeus doesn’t appear during the Cycle of Gods but is a special free spin mode. If you get a full-sized Zeus and at least one of every other god on the reels at the same time, you get 10 free spins.

These spins are powerful. Zeus will borrow a random power from one of the gods for each spin, and just like in the Cycle of Gods, the same power can’t appear twice in a row. Those powers are also boosted, so that you get the same effect in a single spin.

This is the best thing about this slot. If you can activate Zeus’s spins, you are sure to get a big win. You are looking at wins mostly around 50-150x your wager. These spins have the potential to break the bank, but that is up to chance.

Take Olympus is a perfect example of Betsoft’s line of game design. It looks amazing, sounds great, has innovative design but lacks in wins.

When I first saw the slot, I was excited to play it. The mechanics were enticing and I wanted to see every god’s boon. But that was the problem. I was more interested in the possibility of a bigger win than I was of actually winning.

I was always paying close attention to the gods’ symbols and seeing how many I could gather. Those nine spins before the last one were not about winning, but rather just preparing. Unfortunately, that tenth spin was never really worth it.

The game has a major balancing issue. The hit rate is low, which means that you will either get a big win or quickly lose everything. This is something you shouldn’t be seeing in a low-volatility slot.

Take Olympus is a fascinating game that could be tweaked into an instant classic. Unfortunately, it is just a decent game with great visuals.

Browse casinos with Take Olympus and other slots from Betsoft. Create an account and try the game for free before making a deposit.

You can play Take Olympus in English, Finnish, Swedish, German and 19 other languages. 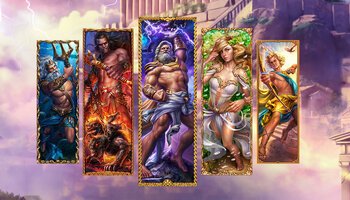