Take Santa’s Shop sees a criminal try and rob the workplace where Santa Claus is having the gifts for all the children made! Even though we obviously don’t approve, we might as well drop by and see if the Wilds, Free Spins and Bonus Game leave anything for us.

Created by Betsoft and released in 2020, Take Santa’s Shop is the unofficial sequel to Take the Bank, which features the same character and many of the same mechanics. Assuming you haven’t played the previous slot, we’ll go over this one together. The game features a 5-reel, 4-row playing field with a respectable 75 paylines.

You’ll immediately notice the workshop in the background surrounded by snowy trees and a full moon, while the reels are filled with a variety of Christmas-themed symbols. Even the low-paying card letters are made to look like ornamental pieces. There are quite a few animations to see when playing the game, including when there is a win as well as the Random Wild mechanic.

When it comes to the sound, Take Santa’s Shop doesn’t go for originality but rather for familiarity. During the base game, we’ll hear a casual-sounding but original Christmas song that features light bells. Wins are punctuated by more standard jingles and whenever the bombs show up we’ll hear a fitting explosion.

Take Santa’s Shop has a large selection of symbols combined with a larger number of paylines. This, combined with the features and the payouts, results in the slot being rated as having Medium Volatility. Expect regular decent-sized wins, sometimes punctuated by large wins due to the Free Spins mode or the special Random Wilds feature.

The payouts in this slot are very low but this is compensated by the fact that you’ll win frequently. The wins won’t be very high but you are treated with a steady supply of them anyway. Perfect for players who enjoy the kick of winning but aren’t too bothered by how much it is.

Take Santa’s Shop makes use of some fun, rather unique features to spice up the basic gameplay. Players will be able to enjoy the standard game as they go while the features are spread out somewhat.

The most unique aspect of this slot is the Ornamental Bombs feature, which translates into Random Wilds. The game is continuously counting down from 10 with every spin. Every time it reaches 0, all Ornamental Bombs on the screen explode, adding Wilds to the tiles they were attached to.

The way to get Ornamental Bombs on the screen is to have the robber symbol appear. When they do, it adds an Ornamental Bomb to its tile with the countdown on them. This can result in only a handful of Wilds or it can fill the entire screen with Wilds, but either way, you are almost guaranteed some wins every 10 spins.

I thought this was a fun and interesting mechanic that helps in creating some stability in the slot. Even though you won’t necessarily always win with these Wilds, it makes it very likely you’ll walk away with something.

The Free Spins mode isn’t as interesting, operating like the regular kind. The one thing to note is that the Ornamental Bombs aren’t part of this and the countdown also pauses. Instead, during the free spins mode there are 5, 7 or 10 Wilds placed randomly on the screen. They move around every spin and can often help in creating wins that way.

Even though Take Santa’s Shop is a sequel of sorts to another Betsoft slot, it is not required to have played it. I would recommend this game to anyone who is either a big fan of Christmas or those who enjoy a steady trickle of wins.

The game isn’t looking to reward you with any bank-breaking jackpots but instead, it offers the fun kick of getting a win, making it a small win and having it occur very frequently. Especially during the free spins mode, I noticed that almost every spin was a win, even though the amounts were nothing to write home about.

As someone who is more a fan of the features and getting wins than I am looking for major jackpots, I think this slot hit a great balance. The game is not complicated to learn but keeps surprising with its Ornamental Bombs and random Wilds.

Browse casinos with Take Santa's Shop and other slots from Betsoft. Create an account and try the game for free before making a deposit.

You can play Take Santa's Shop in English, Finnish, Swedish, German and 19 other languages. 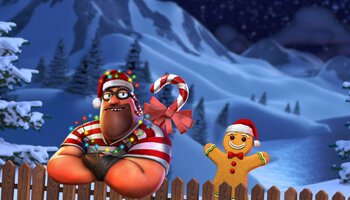