It’s time to… Take the Bank and roll in cash! Join the robbers in this 2019 slot from Betsoft and blow up the bank vault!

In the fast-paced slot Take the Bank you play the role of a robber, who has his eye set on a bank. Particularly on the money vault inside. You’ve filled your bags and pockets with ticking bombs, so all there is to do is rob the bank and don’t get caught by the police. Easy-peasy!

The slot background takes us just outside the bank, and you can see that the sun has already set. What a perfect time for a heist! With the Master Bomb Counter beeping in our hand, we’re so close getting our hands on the money piles waiting through the vault door.

The slot is a mix of old and new, as it looks and feels like a traditional-style game, but with very modern features. Betsoft has also added an interesting hook to keep players’ interest, and the possibility to buy the free spins on the spot is something you don’t find in most slots!

There’s not some deep story behind this slot, so maybe because of that, it doesn’t have any cutscenes etc. Which is a bit of a shame, really. But, even if the game is without cutscenes, it is nicely designed and the theme is represented well.

As expected from Betsoft, the graphics of the slot are top-notch. However, for a 2019 slot, I would’ve expected maybe something more… smoother? Modern? As the slot is now, it does have a distinct feel of an older slot. The way the reels sound, when they spin and stop, is probably the reason. It’s not a bad thing per se, and for someone that appreciates the nostalgic feel, it’s likely to be a charming detail.

The music in Take the Bank is simply excellent. It has a nice tempo and it fits the theme just right. I could easily picture the robber, sneaking his way past the guards and the alarms and hiding in the shadows to this tune.

Apart from the basic symbols of A, K, Q, J, 10 and 9, we’re seeing very thematic illustrations in the game - like diamonds, money, gold bars and vault doors. The diamond is the highest value, paying 3x your bet for five diamonds on one payline.

The gold bars pay 1x your bet, and cash pays 0,9x your wager. The vault door, mini bomb and the crowbar pay 0,6x your bet.

The basic symbols pay 0,3x your bet, except the A, which pays 0,6x. You probably agree with me when I say that these numbers don’t look too attractive. The low payouts from single lines can be explained by the number of total paylines, which in this case is 75. Additionally, the payouts go up with the possibility of the growing amount of wilds.

Take the Bank has five reels, four rows and 75 paylines. The mechanism of the base game is pretty much the usual stuff - choose your stake and spin the reels. But I think that you’ll notice the big bomb aside of the reels, starting to count down from 10.

So while the countdown is still ongoing, the Robbers aren’t actually doing anything. That is, but sticking on their places as ticking time bombs. When you spin the reels again, the bombs keep their places but allow regular symbols to appear underneath. And every tenth spin the bombs go off and are replaced by Wilds.

You have two ways to acquire the free spins in Take the Bank. Either wait, until you get the three Bonus symbols, or buy the feature.

It’s easy to see what the objective was for Betsoft to use the Master Bomb Counter. It’s an extremely effective way to keep the player spinning and hoping to collect as many Robbers as they can.

While playing the game I did, of course, keep an eye on my winnings. Even though I did enjoy playing and the possibility to buy the free spins whenever I wanted, the payouts were very mediocre. Comparing to the bet level I did have some expectations for the winnings, especially during the free spins. However, Take the Bank didn’t quite hit the mark for me.

I did try buying the feature, but Betsoft has, admittedly, calculated the price of this option just right. It always costs just enough that there’s absolutely no way of saying if you’ll come out as a winner or not.

I could see the potential in the free spins, as with the Robbers. Rather, than chasing the big wins, I’d say that Take the Bank might be better for just casual fun. Either way, the best tip I can give, is to play Take the Bank only when you’ve got lots of time in your hands. Or with big bets and using the Buy feature option.

I think Take the Bank is a nice and fun slot, but it absolutely needs more than just a few spins to get everything really going. The Master Bomb Counter is an interesting feature and it can offer a good chance to win big, as is the option for buying the free spins.

What I personally would do, would be playing this slot for fun and when I have enough balance. But not as a last resort, or when I know I don’t have that much time to play.

Play Take the Bank for free

Browse casinos with Take the Bank and other slots from Betsoft. Create an account and try the game for free before making a deposit.

You can play Take the Bank in English, Finnish, Swedish, German and 22 other languages. 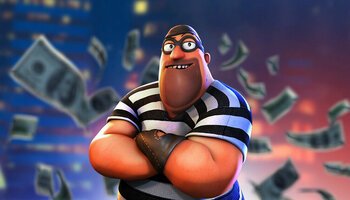