Tales of Asgard: Loki’s Fortune is set in the throne room of the new rules of Asgard, Loki himself. This mischievous Norse god had one ambition and in this slot, we can see how he would do. The game further features wilds, free spins and a non-standard playing field.

This video slot was developed by studio Play ‘n GO and was released in 2021. It’s immediately apparent that they set out to create a visually stunning game. The graphics are very good, with Loki as a fully animated character playing a huge part. It even feels like the playing field was put on the side of the screen just to give the god himself more room.

The playing field has a different shape than we’re used to with 5 reels and 5 rows. Players also receive wins by having matching symbols on consecutive reels. As a result, the game can have anywhere from 3,125 to 100,000 paylines on the screen at the same time. A lot of this depends on the appearance of blank symbols which have no value. Only in combination with the Loki Wild do they reveal what’s hidden beneath.

As far as the presentation goes there really isn’t much I can criticize about it. The music also does a good job setting the mood, keeping things suitably bombastic and fantastical without going overboard. It does seem like the creators took a lot of inspiration from the recent superhero movies with the same character when it comes to his design.

Tales of Asgard: Loki’s Fortune tried hard to embed everything in the Norse roots of Asgard. Even the low-paying symbols are based on classic runes instead of the usual card letters or suits. Using distinct colours things do stay clear for the player. Meanwhile, all other symbols are inspired by Loki and his culture as well. The high-paying symbols portray different animals and characters in a symbolic fashion.

The game has a listed High Volatility with an RTP of 96.2%. Both felt accurate during my time playing. Winning wasn’t very easy and a small win was not enough to even make back a single spin. The slot heavily relies on the player getting multiple wins on several paylines at the same time. This still happens quite rarely, mostly due to the blank symbols that have no value.

Players can pick a bet as normal between £0.10 and £100 depending on their funds. Each has its own advantages and disadvantages. The few that manage to hit the jackpot will walk away with a maximum win of 20,000x your bet. It’s a very sizeable award that beats most other slots out today. Still, players shouldn’t hold onto the expectation to walk away with it.

You will find the following symbols in the game, from most to least important:

Tales of Asgard: Loki’s Fortune does change things up slightly when it comes to the gameplay but doesn’t overwhelm the player either. I found the mix of classic gameplay and original features to be quite compelling.

The features in this slot include:

Most players will likely instantly notice the changed playing field and assume this means that a lot of the features are also changed. I didn’t think that was the case. As usual, the game has more than one feature but none of these changes the core gameplay. Adding random wilds and scatters has been part of slots for years.

When we’re looking at the other features I didn’t enjoy the hidden symbols that much. They are basically a variation of the Megaways feature but in reverse. Instead of the reels having a random number of rows, the reels are filled with a random number of empty symbols. The one big difference is that having a Wild on the screen at the same time will likely trigger a win.

The Wilds are pretty common which makes it more likely that this happens. The scatters weren’t as frequent and I only managed to trigger the free spins mode once as a result. It made this part of the game feel rather inconsequential. The payoff from the free spins mode was also quite disappointing.

Tales of Asgard: Loki’s Fortune definitely looks amazing and shows off the studio’s ability to create something visually appealing. The sound design is similarly of high quality, including an actual voice for Loki. Most of the symbols in the game are unfortunately not animated but I feel like that would have been too much anyway.

When it comes to the gameplay, it was entertaining without being special. There are similar slots that use empty symbols to fill out the reels which I’m not a fan of. The volatility is also quite high since payouts for a single win are very low, even with the highest paying symbols.

If you’re looking for a beautiful slot, if you enjoy Norse mythology as a setting, or if you want to play a slot that keeps things relatively simple this game is for you. Players who want something more unique or a classic slot will likely not find this to fit the bill.

Browse casinos with Tales of Asgard: Loki's Fortune and other slots from Play'n GO. Create an account and try the game for free before making a deposit.

You can play Tales of Asgard: Loki's Fortune in English, Finnish, Swedish, German and 30 other languages. 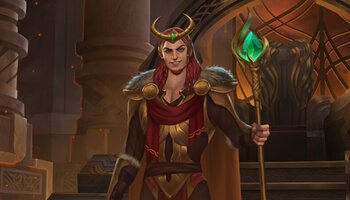