Tales of Dr. Dolittle tells the story of a famous character that can talk to animals, brought to life in various books and movies. This slot adds to the legend with a number of interesting features such as sticky re-spins, multiplier wilds, and free spins.

The 5-reel, 3-row slot was developed and released in 2018 by popular developer Quickspin. The game includes some excellent graphics both on the playing field and in the background. People who enjoy having fun, colourful art to look at while they play won’t be disappointed. Dr. Dolittle himself plays a prominent role in the game, as well as his selection of animal friends. In the background, we can see how he travels the world in his air balloon, giving us great views of the land below.

When it comes to animations, the game doesn’t go overboard with adding movement to the slot but everything still feels energetic. The tiles light up when part of one of the 25 paylines, and some of the symbols do move when they win. The background is largely static but changes between the base game and the free spins mode.

If we listen to the music, we can hear a simple but smooth sounding song playing softly. It evokes the right type of age in which the slot takes place, without going overboard. The sound effects are similarly toned down, with only bigger wins triggering a special jingle. Getting into the free spins mode puts the song into overdrive somewhat but still keeps things relatively light.

Tales of Dr. Dolittle gives players a selection of symbols to play with. While the high-paying symbols are based around Dr. Dolittle and the animals, the low-paying symbols are just card letters. Fortunately, the designers did take the time to make them look somewhat age-appropriate, creating a special font and adding flowers to each of them.

The slot has Medium Volatility which mostly expresses itself by granting nice wins but spread out over more spins. Don’t expect to make back your spin every time, but in general, I found the wins to be large enough to keep my funds relatively stable. As always, the slot offers the possibility of choosing a bet. In this case, players can pick a bet between £0.25 and £100 per spin.

Although the volatility can at times feel punishing and you would expect a rather sizeable jackpot in return, the game only has a max. win of 405x your bet. That’s not very high for any slot, even those with lower volatility. On top of that, I never felt like I was even close to winning this.

Tales of Dr. Dolittle has a light feel around it and that persists when it comes to the features that are included in this slot. The game has only a few and the ones that are there feel simple but effective. Players who are at all familiar with these features won’t have any trouble understanding them.

This includes the following features:

The game heavily relies on the sticky re-spins functionality as it makes it much more likely that a win gets bigger or extra winning bet lines are added. In reality, this feature did activate quite often but was almost never responsible for creating bigger wins. Most of the time, the re-spin wouldn’t add any helpful new symbols to the screen and immediately end, granting me the original coin win.

Having a Multiplier Wild in the game does help somewhat as it automatically doubles the win when part of it, but I would almost never have more than one on the screen. The only exception would be during the free spins mode, where a Wild is guaranteed on every spin. Getting a win when there is a Wild part of it, makes it a lot easier to get additional win lines to keep the re-spins going.

Tales of Dr. Dolittle is a fun little slot that has a great presentation and a fun idea. The setting is quite original although I do think they could have done much more with the concept of talking animals. Instead, it is mostly just used as a backdrop and has no bearing on the features present in the game.

Speaking of the features, they are quite volatile. You will be granted wins semi-regularly while playing the base game but they will be small. As you can see in the list in this review, the payouts for even the largest wins are tiny compared to other slots and you are heavily reliant on getting a good re-spin.

As such, the game isn’t for players that only enjoy the base game of a given slot. People who want to have some variation while they play will get much more bang for their buck, as the re-spin function does change up the basic gameplay.

Browse casinos with Tales of Dr. Dolittle and other slots from Quickspin. Create an account and try the game for free before making a deposit.

You can play Tales of Dr. Dolittle in English, Finnish, Swedish, German and 23 other languages. 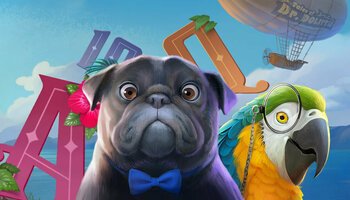