Being in the company of panthers and sloths can bring you to the temple's top nudging prizes. Not without a reason, NetEnt has named their game Temple of Nudges and that is exactly what the gameplay does.

Even though the layout of this game is five reels and three rows, the payout mechanics can create a lot of different twists and turns as the winning symbols nudge down. You can't quite call Temple of Nudges a collapsing wins game because that would be true only partially, but winning outcomes are made on 243 ways to win.

Whatever we call it, the gameplay does a great job in throwing in full stacks of symbols from across the paytable. The game can do respins which can possibly fetch a better payout and this is in addition to the consecutive wins that can form on across the reel set.

Not surprisingly there isn't a wild symbol and there are only eight symbols in the game, which I find to be a concept that has its fans among slots players.

NetEnt has gone pretty trippy with the design of some of the symbols. If you give them a good look, the high-paying animal symbols are made of many polygonal shards and that makes appear unique and amusing.

Thrill-seekers aren't going to find any moving joints on these animals, however, the reel mechanics can arrange for the type of a dynamic that makes Temple of Nudges energetic.

Then there is the sound of tribal drums and a rainforest field recording that bring about the type of a vibe I got from watching Apocalypto on a huge screen for the first time. No coincidence, this temple is set in Maya country too.

I was taken aback just a bit finding out that a NetEnt game has such a short distance between the smallest and the biggest bet at the first level. Coin values are one penny to £1.00 across the fixed bet of 25. So, players can play with at least £0.25 per spin and £25.00. Anyone looking for higher stakes can up the Bet Level.

In terms of payouts, the 'ways to win' mechanism counts the number of matching symbols that have landed horizontally, starting on the leftmost reel. More than one matching symbol that falls on a single reel causes the payout to be multiplied by two, so the amounts on the paytable are not always final.

There is really no need to do any maths because Temple of Nudges crunches all of the numbers for you, which, I must admit, are rather slim for a single payout.

The most valuable symbol, the panther, pays 9x the payline bet for five of a kind, which amounts to 0.36x. But then, add the possibility of multiple nudges, respins and symbol stacks, and any of the payouts on the paytable will begin to assume more appetizing values.

Because the nudges define the gameplay, these aren’t at all rare, so it is quite common to see a number of consecutive wins that will have been triggered by the same bet. Having a sequence of nudges start with a block of two or three reels is going to exceed the five matching symbol payout sum within the first or second drop of new symbols.

Temple of Nudges is one of the more energetic avalanche/cascade slots I’ve played and I can freely compare it to Gonzo’s Quest. Don’t matter the different appearance, I still feel there is a semblance in the RTP values and the medium variance. Still, I think Temple of Nudges has been inclined at churning out surprising runs made of six, seven or more subsequent drops. The payout potential is greater than 2000x your bet, so there is definitely that part of the thrill to enjoy while playing.

Play Temple of Nudges for free

Browse casinos with Temple of Nudges and other slots from NetEnt. Create an account and try the game for free before making a deposit.

You can play Temple of Nudges in English, Finnish, Swedish, German and 20 other languages. 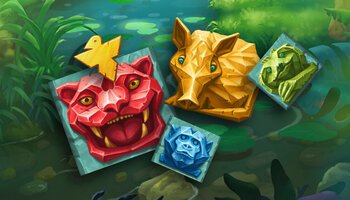