Temple of Wealth is a game that celebrates the Asian culture and specifically their traditions and superstitions when it comes to wealth. This slot features free spins, mystery symbols and 4 progressive jackpots that players can try and win.

Developer Play ‘n GO released Temple of Wealth in the second half of 2020, making it one of the newest slots currently available. The game isn’t the most original in terms of graphics, even though everything looks sharp and detailed. Unfortunately, it does lack in terms of creativity since a lot of the symbols have been seen a hundred times before. The 5-reel, 3-row playing fields holds a total of 243 ways to win, but still has High Volatility.

The animations in this game are serviceable but not very interesting. Depending on the symbol it will show some original animation, but usually, it will involve a simple jiggle or zoom of the symbol. It feels rather uninspired, in contrast with other slots released by Play ‘n GO this year, such as Jolly Roger 2 and Octopus Treasure.

When it comes to the sound, I have to say the same thing again. The quality of the sounds and music are all great, with a lot of attention to detail. Unfortunately, it lacks in originality and only plays generic Asian-sounding music and sound effects. I feel like there should be some room between being completely disconnected from the theme and simply copying existing effects.

Since the game has high volatility, there are quite a lot of symbols. The payouts are compared to other slots also rather low, even with five-of-a-kind wins. The symbols in this game include:

With the 243 Ways to Win mechanic and a number of features, the game assumes you’ll get more than 1 win at a time, excusing the low payouts for an individual win. If that works out in your favour obviously depends, as it can go either way.

You’ll find the following features in Temple of Wealth:

During the base game, it can randomly activate the Gold Reels. This can turn 1 or more reels into a Gold Reel, identified by its glowing golden border. When a Wild would land on a Golden Reel, the player wins one of the progressive jackpots.

Even though that sounds appealing, I found the Wilds to be extremely rare, making it very unlikely for this to happen. Obviously, that makes sense, otherwise, everyone would be winning jackpots left and right.

The Free Spins mode wasn’t a lot more frequent and I only activated it a handful of times during my time playing. Activating the free spins mode requires 3 Scatter symbols on the screen. Once this happens, you’re presented with 6 choices. You have to decide whether you’d prefer more free spins or more mystery symbols to appear. The more free spins you pick, the fewer mystery symbols will appear, and vice versa.

All in all, the free spins mode felt rather entertaining but the mystery symbols weren’t as strong as they are portrayed. They did help me create a few wins but these mystery symbols might as well turn out only to be card letters which have pitiful win values.

Temple of Wealth is part of the Wealth series, accompanied by Beast of Wealth and Celebration of Wealth. Even though it is a nice, capable slot it doesn’t really do anything very special in terms of look or feel. The gameplay is solid but also unremarkable. If I had to pick out of the three, I would probably choose this one last.

That’s not to say it’s a bad slot. The features are present a decent amount of times and the volatility wasn’t too high that I felt like I only lost coins. It did keep the special features out of reach for much of the time, leaving only the base gameplay to enjoy.

Players can pick bets between £0.10 and £100 per spin, while the max. win is 5,000x your bet, not counting the biggest progressive jackpot a player could potentially win. It might be good motivation to give this slot a try but I found the overall time spent on this slot to be rather forgettable!

Play Temple of Wealth for free

Browse casinos with Temple of Wealth and other slots from Play'n GO. Create an account and try the game for free before making a deposit.

You can play Temple of Wealth in English, Finnish, Swedish, German and 30 other languages. 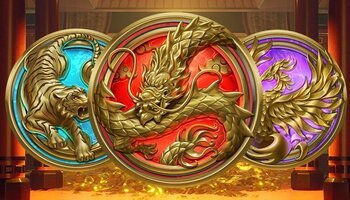