Temple Quest Spinfinity brings the game of Temple Quest to a new level with its Spinfinity feature. The game also features colossal symbols, free spins and wilds to help players have their shot at some big wins.

The slot was developed by Big Time Gaming and released in 2017, with its graphics starting to show their age. The game uses classic 3D graphics which are sensitive to becoming outdated, having little texture to them. No wonder that more modern games are using hand-drawn graphics as those are much less prone to looking outdated. The 5-reel, 4-row playing field looks very chaotic because of the highly detailed symbols, as well as the jungle background.

Since the game uses too many colours and the art is both detailed and consists of lots of nature, it all started to blend together in my eyes. Whenever there’s a win on one of the 40 win lines the tiles involved only change colour, which also doesn’t help with seeing what’s going on. The design feels rather confusing and overwhelming and I think the developers could have gone for something a bit calmer.

With regards to the sound, the game makes use of classic jungle sounds to evoke the feeling of being in the middle of the wilderness. In stark contrast, the game uses some very confusing sound effects when there’s a win or when the free spins mode is activated. When there’s a big win, the game triggers the sound of a school bell, which surprised me greatly. The soundtrack that plays during the free spins mode is also not in tune with the setting.

Temple Quest Spinfinity uses a standard collection of low-paying symbols in the shape of card letters. These are slightly adjusted to look somewhat Incan but this is minimal, with the biggest element being the gems embedded in the symbol. At the same time, the high-paying symbols aren’t very original either. These mostly consist of masks and gems, which create a cluttered feeling for the eyes.

Players will be able to count on Medium Volatility as the slot does have quite a number of different symbols but the larger number of win lines coupled with several features helps balance this out. I found the game to award me wins pretty regularly although they weren’t often very big. My funds ended up staying around the starting point. This is probably not a slot for you if you’re looking for a single big win to go home with, but the wins aren’t too small to feel trivial either.

If you want to adjust the size of your bets, the game lets you pick one between £0.10 and £50 per spin. There is a maximum win of 1,500x your bet which is not too bad but it’s definitely not one of the highest jackpots around, even considering the volatility.

Temple Quest Spinfinity has a few features that change up the gameplay a little bit, but I wouldn’t consider any of them to be very original. They do offer some interesting changes though.

The features are likely familiar to all but the newest players. Both the Wilds and the Colossal symbols can appear during the base game. The Wilds are rather frequent and can help in creating some sizeable wins.

When it comes to the Colossal Symbols, they’re not quite as common during the base game and they can appear in different sizes. I’ve seen them in size between 2x2 and 4x4 with them changing into a random symbol. This can either result in a massive number of winning bet lines, or in none of them. It makes the feature difficult to classify as either good or bad.

How to activate the free spins mode is also slightly original. The size of the symbol and how much of it appears on the screen will determine how many free spins the player will receive. The maximum is 9 free spins while the minimum is 3. The free spins colossal symbol is always 3x3 in size. During the free spins mode, it’s possible to retrigger additional free spins.

Temple Quest Spinfinity isn’t a bad game but it is very much a slot that fits down the middle of the road. The graphics have become outdated already even though the game is barely half a decade old, and the choice of textures and colours makes it very difficult to see what is going on.

The gameplay is more solid but also very simplistic, with only the colossal symbols being something that isn’t present in most slots. I liked that the game uses only a single free spins tile to determine activating the mode, making it more likely to trigger them.

If you are looking for a simple slot with medium volatility which is not likely to cost you a lot of coins to keep playing, Temple Quest Spinfinity is a fine choice. At the same time, people desperate for some originality or excitement aren’t as likely to find it here.

Browse casinos with Temple Quest Spinfinity and other slots from Big Time Gaming. Create an account and try the game for free before making a deposit.

You can play Temple Quest Spinfinity in English, Swedish 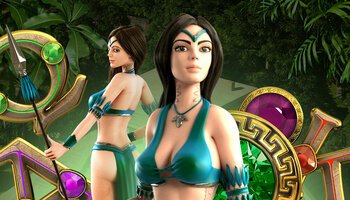