If you've ever dreamed of appearing on a TV game show but the waiting lines make it impossible, The £100k Drop may be it for you. The game was suggested by an algorithm because I was playing Deal or No Deal. Thanks, computer science, for pointing me to a unique game by Red Tiger Gaming that I've thoroughly enjoyed playing.

100k Drop mimics a game show and succeeds at that by providing a fitting atmosphere that can fill you with excitement by way of excellent graphic design, game dynamic and a thrilling soundtrack. The gameplay may not be as intricate as in the few other slots themed on television game shows, but it surely has one of the most unique bonus features I've seen and I'll get to that in a bit.

The reel set consists of three rows and five reels with 20 paylines which I think is the perfect layout for a game that has only one bonus feature. Nevertheless, there is a wild symbol that can substitute for any of the standard symbols which is a helping hand against its particular paytable structure.

It is difficult to find any bumps in the graphic design. The symbols, the background and the overall environment successfully mimics a game show by virtue of emulating. The symbols are wrapped in an edge of neon and the high-paying picture symbols set the mood for playing.

Typical or not, the selection of symbols works. There is a suitcase filled with cash, a safe that is likewise filled with cash and some more cash in piles that are bundled in red ribbon. Red Tiger Gaming wants to make sure there aren't any doubts about the objective of the game and the title The 100k Drop sums it up pretty well too. Oh, and there is the pretty host, which is the game's wild symbol.

Another detail regarding the design is the game's energetic soundtrack. You can jam to that tune really, but there are also fine details that you can hear in between events and close-calls. Overall, top-level graphic and audio design.

I said that The 100k Drop has a unique extra feature. It all begins with getting three Bonus symbols to land on the reels, which takes you to the Hot Seat, from where you are put in charge of a large sum of cash which is relative to your bet.

If it sounds fun reading it, it is definitely more fun playing it. Sadly, it's the only feature in the game.

The only highlight about the paytable comes with the game's high-paying symbols, but there is a caveat even in that regard. The pile of cash, the suitcase and the safe symbols pay between 10x and 300x your payline bet. Landing three of a kind pays 1x your bet at best.

The wild is the most valuable symbol, paying 500x your payline bet for five of a kind. The remaining symbols tend to crop up in winning outcomes most often and I am not impressed at all in this regard.

The bottom line of The 100k Drop is low payouts and super fun and potentially rewarding bonus feature. I mean, I've played this game for the bonus only. You can enjoy the graphic design and the flow of the game, but not so much the payouts.

On the other hand, there is a reason why it's called that. You can make it out with as much as 2000x your bet in the best possible outcome.

Play The 100K Drop for free

Browse casinos with The 100K Drop and other slots from Red Tiger. Create an account and try the game for free before making a deposit.

You can play The 100K Drop in English, Finnish, Swedish, German and 18 other languages. 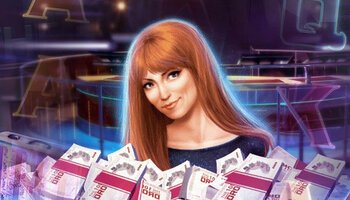