Play The Adventures of Ali Baba

Ali Baba has done it - he’s found the great treasure of the infamous thieves. Now he quickly has to come up with the password, gather up the gold and get out. What was it? Seames? No. Sameas? No…

The Adventures of Ali Baba is a slot game published in 2019 by RedRake Gaming. It has gathered a lot of attention with the impressive art style and the infinite free spins. The game presents Ali Baba himself, of course, but also a less-known slave girl, Morgiana. According to the stories of One Thousand and One Nights, she helps Ali Baba by killing the leader of the thieves and eventually marries the son of Ali.

The graphics and sound are both high-quality stuff here. No heavy 3D animations, but I doubt it would look good with such a classic story anyway. Anyhow, the slot looks like an old storybook and I really like the detailed art style used here.

The starting screen shortly told me what features to expect, and what got me is the lack of music here. Just the sound of waves hitting the shore and birds singing somewhere in the distance. But, don’t be fooled, the game does have some very magnificent music - it’s just being saved for awesome moments.

I do think this slot looks beautiful and I love hearing the waves in the background. However, I don’t much care for the sound effects of the buttons and reels. They feel like they’re too general for this game and, in my opinion, could have been done better.

The Adventures of Ali Baba has six reels, six rows and 50 paylines going from left to right. The winning combinations always start from the first reel. The minimum bet per spin is 20p and the maximum is £50.

You may win unlimited free spins from the game by landing six Ali Babas to the reels.

The base game has four symbols that appear as stacked. These are Morgiana, the cave, the desert and Ali Baba. Morgiana is 4 symbols tall, as the others are only as tall as two normal symbols.

These symbols can appear both normal and stacked during free spins. Ali Baba is only used in the base game.

Wins Tornado is a randomly activated feature which brings a sand storm upon one of the reels. Then the said reel is copied to the adjacent reel on the left.

The game activates re-spins if you manage to land three or more Ali Baba symbols. If with these re-spins you get six Ali Babas in total, spelling SESAME, you win free spins. Note that all Ali Baba symbols need to be fully visible.

During the free spins, every bag of gold coins turns to a sticky symbol and stays in its place for the rest of the spins. The free spins continue, until the band of thieves appear, giving you one last spin.

As the bags of gold coins start to gather up, they can also fuse together and create 2x2 and 3x3 sized giant symbols. These symbols multiply your wins by 2 and 4.

First off, The Adventures of Ali Baba runs really smoothly on both computer and mobile. However, I like spinning my slots on the computer and by pressing Space - but I guess this is not an available option here which is too bad. At least to me, it gets very annoying to use the mouse to keep the slot spinning if I don’t want to use the auto-spin.

While playing the game, I noticed that the Wins Tornado got triggered quite often, copying the reels and paying nice wins. I also liked the stacked Wilds, which were present almost all the time. After a few close calls, I managed to activate my first free spins. They were a bit disappointing at the start but as the money bags kept piling up, so did the payouts. I didn’t get to see the Gold symbols fusion, though.

Play The Adventures of Ali Baba for free

Browse casinos with The Adventures of Ali Baba and other slots from RedRake Gaming. Create an account and try the game for free before making a deposit.

You can play The Adventures of Ali Baba in English, Finnish, Swedish, German and 19 other languages. 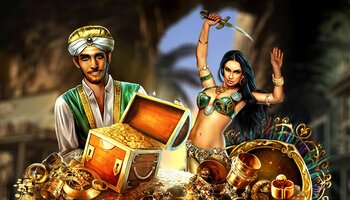 very good game but it needs more elaboration to my game

i now this game.. This the best