Those who enjoy going on a good fishing challenge while keeping their feet dry, there is a game called The Angler that just may do the gig.

I had noticed the game some time ago and wanted to just check out the features and the figures. Not too bad for what is one of Betsoft's virtually known productions.

My highlights from The Angler are the RTP, which is a solid 97.10% and the maximum payout potential that the game can award in a single spin - 130,000 coins times the payline bet. Slot players who are looking for beefy figures when betting against the odds, this is a neat game to consider.

The reel set consists of three rows and five reels. There are 20 paylines, but this number isn't fixed as you can bring it down in odd-number increments. I played across all 20 lines so as not to miss out on any Wilds and potential wins.

The Angler has some strong sides, but the graphic design can put off players that are looking for a reel adventure that packs more energy. I think this is the reason why the game may escape the savvy slot player’s radar.

Betsoft's graphic designers have done a decent job to portray a fishing trip, but I am at a loss of words regarding the choice of symbols. I can't help it but be extremely nitpicky because what is a pufferfish doing in a setting that isn't Japan's Pacific rim?

There is a goldfish in the picture too, and a shark, but there is no sign of trouts, carps, bluefins and marlins? Come on, Betsoft. Fishing enthusiasts aren’t interested in catching goldfish and you need a much bigger boat if you are fishing for sharks. Then there is the cute tortoise. I'd hate to see one of these critters caught on a line.

So sorry, but the symbols are too unrealistic, or should I say, out of tune with the premise. Other than that, The Angler can offer a few fun visual effects that would have looked pretty good, had the cast of characters been something else than what's on the paytable.

This part is a lot better compared to the graphics. For starters, the Wild symbol comes with an extra role during the free spin bonus and there is a second feature that lets the player cast his line in the water and pull out a potential prize.

The octopus is the Wild symbol and does the usual in the base game. Thankfully, during the free spins bonus, Wilds that appear on the reels remain in place until the end of the bonus.

I had two wilds lock in place late into the spins and I wish it had happened earlier. If you get a Wild on the first reel early in the bonus, your odds at winning bigger wins suddenly get a much-better outlook.

The pearl in the oyster symbol can trigger the free spins bonus by landing on reels three, four and five. Another set of three bonus symbols retriggers the round, which is good, just too bad they are constrained on three reels out of the full five. Nevertheless, if you are determined to play and get a taste of the bonus, the sticky Wilds can make a huge difference if they come into play.

The Bonus symbol appears on the first three reels and you need three to trigger the fishing game. I like it that Betsoft is giving the players a little bit of interactivity. Sure, the outcomes are completely at random, but you can make out with a decent amount of cash because the prizes go up in size after you make your first catch.

Players who want to get a taste of The Angler can play for pennies, literally, by bringing down the coin value to 1p and selecting one or few active paylines.

Another feature that's part of several Betsoft slots from the same period is the Coin Flip, Double Up game of chance. The corresponding button in the bottom-right lights up following a base game win. Any amount can be doubled if you call the coin flip right.

As for the payouts are alright, I guess. Maybe not as good as those on Betsoft's The Magic Shoppe slot, but I'd say it's good enough. My measuring stick is how many symbols can return your bet, and for The Angler that is four King card symbols.

The low-paying symbols pay as follows, for three, four and five of a kind:

The high-paying symbols have a much better payout structure that lets you gain double or more your bet for landing four matching symbols:

The Angler has more strong sides than weak. The maximum payout potential is good, even though the odds of winning the entire sum from a single spin are extremely slim. I can see how The Angler can bring you closer to a big win.

A free spins bonus getting retriggered two or more times, with three or more sticky wilds will do the job. The possibility is there. But, the graphics deflate the potential excitement in playing the game.

My verdict is - there are a lot of thrilling high variance games out there and some of them involve fishing.

Play The Angler for free

Browse casinos with The Angler and other slots from Betsoft. Create an account and try the game for free before making a deposit.

You can play The Angler in English, Finnish, Swedish, German and 22 other languages. 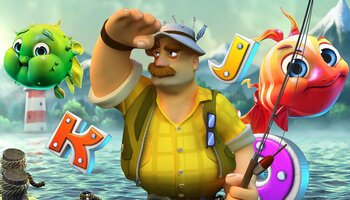