The Curious Machine is a slot that brings players into the laboratory of scientist Miles Bellhouse as he develops and experiments with an actual time machine. Players that go on his adventures with him will be treated to re-spins, a bonus game and free spins.

The slot was developed and released by Betsoft in 2012 which has resulted in the graphics becoming somewhat outdated. As was popular at the time, the designers used 3D graphics to create the visuals of the game and those age notoriously poorly. The 5-reel, 3-row playing field does offer enough room to show off the different symbols and I did appreciate the amount of detail that was put into all the visuals.

We find ourselves in Miles Bellhouse’s laboratory where the time machine is stalled. The symbols mostly portray either different technical elements of the machine or the time periods it can travel to. When the game triggers the free spins mode or the bonus game it will show an additional extra screen that helps the player get immersed.

Whenever there is a win on one of the 30 paylines the tiles involved are enlarged but unfortunately, they aren’t animated. Only the Vortex Wild has a brief, simple animation. I did like that all the symbols were originally created for the game and didn’t use any kind of standard symbols like card letters or suits.

The Curious Machine has a whimsical style that is shown in the graphics. A lot of the figures and characters are exaggerated with big cartoon faces and other obvious details. I would have liked to have seen more animations as I think it could have added to the setting, but considering the age of the slot, it’s not completely surprising that they aren’t there as much.

Getting a win will light up the tiles and show the total coin win. Even though the payouts for the longer paylines are rather big, the game only has Medium Volatility which makes it statistically easier to get a win. The max. win of 1,666x your bet is quite nice considering the volatility and the way the game awards coin wins.

The Curious Machine might be a somewhat older slot it still has some very nice features that take up quite a bit of the game’s playing time. The free spins mode and the bonus game both have original backgrounds and offer the player some extra options at winning bigger wins. The base game is kept rather simple but the special Vortex Wilds have the potential of awarding nice wins as well.

The features you’ll find in this game include:

Even though players will spend most of their time in the base game, both the free spins mode and the bonus game are activated quite a lot. The re-spin functionality was a lot less frequent and I really only noticed it when reading about it in the paytable. The game does not tell you how close you are to activating it either. Either way, I can’t say that feature is very interesting or helpful.

This isn’t the case with the bonus game. In this mode, Miles is discovered by his opponent and has to use the time machine to fly through time and space, visiting different locations. Every location he visits will grant a random coin win to the player. The number of jumps varies from 1 jump to 5 or more. The coin wins for each location are added together and rewarded as the bonus game ends.

I thought this was done well, with each location having its own screen and some text to explain where we were. The coin wins are also quite substantial, making it a nice surprise whenever the mode is enabled.

The free spins mode is about as easily triggered but functions a lot like any other free spins mode. The game offers a handful of spins and with each spin, a random multiplier is activated. In my experience, this mode would award quite some coins without breaking the bank.

The Curious Machine is an older slot but still has everything that modern video slot players are looking for. Plenty to see, activate features and the opportunity to win big. The game’s graphics are easily the most outdated but because of their creativity and detail are still fun to look at.

Its medium volatility will likely appeal to the more casual players who would like the opportunity at some bigger wins without having to play for hours. With the ability to pick a bet between £0.02 and £150 per spin, players can still decide how much they are willing to risk.

In my time playing, I found the game to grant a little more wins than I lost, leaving me with a net positive on my funds. Obviously, this can change for every player but the game never feels like it is treating the players unfairly.

Play The Curious Machine for free

Browse casinos with The Curious Machine and other slots from Betsoft. Create an account and try the game for free before making a deposit.

You can play The Curious Machine in English, Finnish, Swedish, German and 23 other languages. 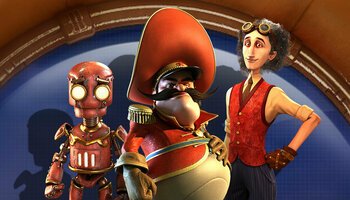