The Dog House is a game that lets the dogs out and has them trounce the yard while players can sit back and watch. This whimsical slot combines some seriously cute cartoon dogs with some very interesting features, including free spins, multipliers and sticky wilds.

The game was developed by Pragmatic Play and released in 2019, which means it’s still pretty new. The graphics are great, showing off the designers’ talents as each of the dogs look silly but cute. There are also some interesting animations integrated into the game, mostly related to the activation of the free spins mode. The low-paying symbols are simple card letters, slightly detracting from the theme but they share the same style and colours as the other symbols.

The background shows us literally in the backyard, where the dog house is only visible when activating the free spins mode. The details are pretty intricate and the subtle movements in the background make it feel more believable that we’re really outside. The game has a 5-reel, 3-row playing field which allows the symbols plenty of room to show themselves off. The 20 paylines are about average compared to other slots.

When listening to the game’s music and sound design, it won’t offer people many surprises but it doesn’t have to. As can be expected, dogs barking plays a part in the game but it’s not as overused as I feared. The music itself is simple and upbeat, fitting the rather cartoony style of the game’s visuals.

The Dog House offers players a moderate number of different symbols, keeping players on their toes with getting any wins. The game doesn’t make it very easy to get bigger wins during the base game, which fits its High Volatility. Players who enjoy the type of game where wins are usually only really big during the bonus feature will get a kick out of The Dog House, as they have made this very obvious.

Through the use of dogs and random items as high-paying symbols, it is easier to see when the player is close to a big win. Some other slots don’t really differentiate between the symbols that are worth a lot and those that aren’t, resulting in a confusing time. Here, it’s obvious which symbols are the best to get.

Because the game has high volatility, players should do well starting off with a lower bet to see how often the free spins mode is activated. Nothing is worse than playing for a while and running out of funds before a big win is hit. In The Dog House that means making it to the free spins mode.

To facilitate this, players can pick a bet between £0.20 and £100 per spin, which is a common spread of bets. As the bets get higher, so do the potential wins but they will also drain your funds quicker. When playing with a standard £1 bet I found my funds to be very effective while still managing to hit some nice wins.

For a few players, they will hit the jackpot which is a very nice max. win of 6,750x your bet. Although I never felt like I was close to getting this win, there are enough features in place during the free spins mode that it feels like it is possible. It all depends on a player’s particular play to see how it ends up.

The Dog House doesn’t use a lot of different features but the ones that are there work well together and offer some amazing synergy. All of this only comes out during the free spins mode, which makes most of the gameplay a question of reaching that mode. It’s not especially easy to activate but it does trigger frequently enough to feel like part of the game.

To begin with, a quick look at the features:

Players will probably not get a lot out of the base game, except for the cute graphics and the details. The gameplay is extremely basic and even standard features like Wilds are not enabled during this part of the game. Instead, the player is required to start the free spins mode and then all features are activated all at once.

Once the player gets 3 Bonus symbols on the screen, the view shifts to the inside of the dog house where one of the canines spins a wheel to generate a number of spins. These are added together to give the player their total number of free spins for that turn. This can be between 9 and 27 free spins, depending on how the wheels land.

After that is done, the actual mode starts. During this part of the game, players will see Wilds start to appear on the screen. Each Wild has a random multiplier and Wilds also become Sticky for the rest of the free spins mode. This does mean that the game is heavily dependent on Wilds appearing in order to generate big wins.

In my time playing, I found that the free spins mode will generally grant the player at least 1 or 2 Wilds but it will very occasionally help the player out with more. Obviously, the more Wilds on the screen, the bigger any wins can be.

The Dog House is a very inoffensive slot that has cute dogs, nice graphics and some great details. It uses man’s best friend as a theme and it does it well, but like the animal, the slot doesn’t have a lot of depth.

It obviously doesn’t have to, since the core gameplay is fine and the free spins mode is a great part of the game. The high volatility means that the game depends on the free spins mode to grant players a shot at these wins, but I felt the game was just lenient enough for that to be attainable.

Players that are looking for a very intricate or engaging slot will probably want to keep looking. On the opposite end, players that enjoy high volatility slots that can reasonably be expected to grant at least a few big wins when playing long enough will have a good time with this game.

Play The Dog House™ for free

Browse casinos with The Dog House™ and other slots from Pragmatic Play. Create an account and try the game for free before making a deposit.

You can play The Dog House™ in English, Finnish, Swedish, German and 17 other languages. 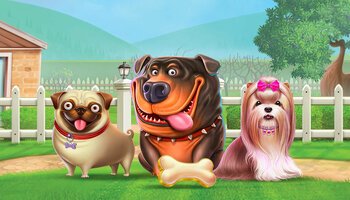