The Epic Journey is based on the old story where a group of explorers find an entry into the hollow Earth and encounter ancient beasts and amazing sights. Players that join them will also find three playing fields, a free spins mode and multiplier wilds.

This slot was released in 2015 by developer Quickspin, who made sure the game stood out through the use of some impressive graphics as well as a few interesting features. Unfortunately, the game uses Adobe Flash and it hasn’t been updated yet which means that players will not be able to play this slot unless they use Adobe Flash which is not recommended.

Since this slot was a pretty big deal when it was released I will assume it will get transferred to HTML5 and be available to play in the future, and that’s why you can read this review. The game includes not 1 or 2 but 3 separate playing fields on which players can score wins. Each playing field has 5 reels and 4 rows, resulting in a total of 100 paylines.

The background shows us several gorgeous drawings, including the hole in the planet crust through which the explorers venture down and a wide vista of the lush jungles underneath the Earth where dinosaurs and other great beasts roam. The symbols are divided into characters and gems, with no card letters or card suits to ruin the setting.

The Epic Journey has three playing fields that all use the same symbols, but it still requires quite a selection of symbols to do this. All of them are uniquely made for the slot, featuring different special characters as well as a series of colourful gems to illustrate the low-paying symbols. Whenever there’s a win, the tiles involved light up.

Players can look forward to a max. win of 625x your bet which seems low when compared to other slots but fits the game’s Low Volatility. To change the total win players can pick a bet between £0.80 and £80 per spin.

I found the gameplay to be quite interesting but the three playing fields are a little much to keep track of, especially considering they all have their own paylines. The symbols do all have their own appearance and colour which helps tell them apart, and the game slows down a bit to show the wins.

The Epic Journey seems very complicated but doesn’t have too many features and should be easy enough to understand for all but the most novice players. The most intimidating aspect of the slot are the 3 playing fields and they will also require the most attention while playing.

I think it is an interesting approach by Quickspin to give players the ability to bet three times for the cost of a single spin since each playing field operates largely on its own. The only time they really interact is with the Bonus symbols, which can trigger the free spins mode even if they appear on different playing fields.

The two bonus games and the free spins mode all stand apart from each other, each with its own background and gameplay. The Free Spins mode is the best able to grant players the jackpot but this is very unlikely still. The two bonus games can grant some sizeable coin wins but they won’t be as high as the highest possible jackpot.

I thought all of the features were fun and interesting but they can become quite overwhelming quite quickly if players aren’t paying enough attention. The classic slot player will likely not enjoy a large number of different features as well as the three playing fields.

The Epic Journey is a truly epic slot in terms of scope and features, which will likely scare away some players as getting to grips with the number of possibilities might be too overwhelming. The ones that stick around will likely feel that they are getting their money’s worth as there is constantly something to see and often something to do.

If you like the setting of dinosaurs and other long-forgotten animals in a hidden land, which is shown with various images and backgrounds, you will likely have a good time with this game. Assuming it will get transferred away from Adobe Flash to HTML5, the game will be one of the better-aged slots in the Quickspin library.

If you get the opportunity to play this game I would definitely recommend it. I think only the most fervent classic slot players will get something out of this game, even if it’s only the art or the gameplay with 3 separate playing fields.

Play The Epic Journey for free

Browse casinos with The Epic Journey and other slots from Quickspin. Create an account and try the game for free before making a deposit.

You can play The Epic Journey in English, Finnish, Swedish, Russian and 4 other languages. 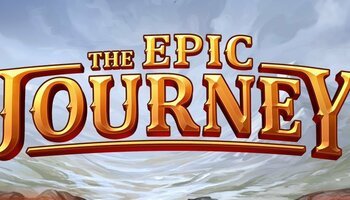