Start the countdown and head for Venus. Get ready for a bumpy ride, as this rocket ride is not for the faint of heart.

In 1986, the World was blessed with a rock’n roll classic that has stood the test of time. Now nearly four decades later, we still fondly remember Europe’s big hit, The Final Countdown.

The song’s influence can be seen in places like this slot. Big Time Gaming went all out and built an entire game around it in 2019, and did a great job if you ask me. They also licensed the original song, which we get to hear in the game.

The Final Countdown is a six-reeled slot with 4,096 paylines. This is a volatile ride that has big payoffs if you manage to hit them. If you are ready, then buckle up and hold on tight. It’s time to leave Earth and we might never come back.

Big Time Gaming did a wonderful job fleshing out the song, The Final Countdown. There isn’t much to go on if you actually listen to the song, which is probably a good and a bad thing. You aren’t restricted by anything, but a lot of people are going to have their own idea of what things should look like.

The visual style is trying to go for something like 80s retro-futurism, but it’s just a bit off. The colour scheme and the pilots remind me more of Soviet propaganda and cosmonauts, rather than more western astronauts. It doesn’t look like it was a conscious choice, as the rocket itself is modelled after the American Titan IV space rocket and the Space Station V from 2001: A Space Odyssey can be seen in the game. Nonetheless, the slot looks great and unique.

Then we get to the sound and music, and this is where things get problematic. First things first, we do get to hear the original The Final Countdown song by Europe, and bits of it have been sampled to the rest of the songs. The bad thing is that the music is choppy.

BTG has always had an issue with songs and tunes cutting off during the base game. Every spin resets the music and in this case, the songs don’t loop properly. This is really annoying, as you are spending most of your time in the base game listening to the same short loop over and over. If they had fixed this, the game would have an easy 5-star rating.

The sound effects on the other hand are done well. The constant low rumble of the rocket is amazing, especially if you have good speakers that can play low tones. A real effort was put into these sounds and it paid off.

The symbols are the weakest link. The slot has very unimaginative symbols, which is a common thing with Big Time Gaming. Card symbols and gems are not something that you want in a slot about space travel.

The symbols are also very polarized when it comes to their wins. There are ten basic symbols and only one of them is really worth something. The purple gem is many times more valuable than the second symbol on the list and this is a perfect analogue for all the wins in the game. Dry spells and tiny wins are a constant reminder of what this game is about until you hit three scatters and all bets are off.

The Final Countdown relies heavily on its special features. Clone Wilds is a good start, but the two Free Spin features are what you should be aiming for. The good question is, which one will you choose? Both have a lot of potential but are structured a bit differently. It’s hard to say which is better, but I tend to go for the Leaving for Venus Free Spins, as the Velocity Wild is amazing.

No matter what you choose, this game is a wild ride from start to finish. Just like most of what BTG releases, this is a volatile game that can fly high or come crashing down.

What would be better than to lock up a couple of reels and make them have the exact same symbols? This might be a familiar feature if you have played slots like Twin Spin, but Reel Clone goes a bit further. Up to four adjacent reels can be cloned and have the same symbols on them, but if there is a wild, it will be a Clone Wild, which is bigger and better.

When reels get cloned, the wilds get even better. If a clone reel would have a wild, it won’t just be cloned horizontally. The wild is always a square with height equalling the width. So, if you have three Reel Clones, a wild there would be three spaces tall and three spaces wide. Do note that the number on those wilds is not technically a multiplier, but an indicator of how many ways to win it is.

It is time to leave Earth and hear the final countdown. You start off with 8 free spins and a roaming 2x2 wild symbol. You can see the countdown counter that gets smaller with every scatter symbol.

A scatter can drop the countdown multiple digits and if you get it to zero, you retrigger the spins and increase the size of the wild. First retrigger will give you 4 extra spins and a 3x3 symbol, and the second time is worth 2 spins and a 4x4 wild.

The trip is still long and maybe they welcome us. You get 15 free spins with Reel Clone on every spin. Getting three scatters will retrigger the spins, giving you an extra 15 spins each time. This feature has a special Velocity Wild, which is more powerful than a regular one.

The Final Countdown is a great example of a good licensed slot. Sure, the song is the only thing licensed, but BTG was able to create an entire world around that song. The game is gorgeous to look at, but I can’t love the way BTG does music in their games.

This game is not made for players like me. I find that the volatile gameplay is more taxing than rewarding for me. Even so, I still can see that for the right player, this slot is amazing. If you are one of those players who likes to shoot for the stars, then this rocket ride is for you.

In the end, I still love this slot for what it is. The developer actually took a nearly 35-year-old song, built a slot around it and even made it a good one.

Play The Final Countdown for free

Browse casinos with The Final Countdown and other slots from Big Time Gaming. Create an account and try the game for free before making a deposit.

You can play The Final Countdown in English, Swedish 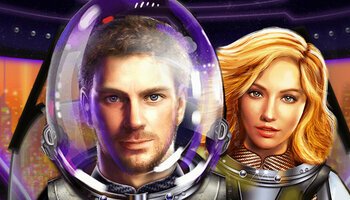