Play The Golden Owl Of Athena

When The Golden Owl of Athena spreads its wings, you shall receive the wisdom of Gods - and maybe some wealth, too!

Betsoft released The Golden Owl of Athena in the summer of 2018. The theme is fairly divine and breathes life into the gods of Greek mythology. The goddess Athena, who was later known as Minerva in Roman mythology, was the god of many things; warfare, wisdom and handicraft. Her owl was, among other things, the symbol of knowledge.

In The Golden Owl of Athena, the owl brings us its wisdom in the form of free spins, Scatters and Wilds. Also, the smiling goddess herself is gracefully starring the game as a high-paying symbol.

If you happen to like the slot Book of Dead from Play ‘n GO, I highly recommend trying this one as the game mechanism is almost identical.

I think that The Golden Owl of Athena is one of the prettiest slots from Betsoft. True, it doesn’t offer the magnificent 3D animations of which Betsoft is known for. I still think the game runs nicely even without them and makes the experience a bit lighter. Maybe the modern players appreciate the effective gameplay over the visuals?

The base game is played in a scene where it’s an early evening. With the free spins comes night, and the bright moon shines our way. As the philosopher, Georg Wilhelm Friedrich Hegel wrote: “the owl of Minerva spreads its wings only with the falling of the dusk”. Betsoft actually included this in the slot - how cool is that?!

When I first saw the background art for this slot, I instantly thought of the Disney movie Hercules. You know, the animated film? You can actually see Athena in the movie, although very briefly. She’s the blue goddess, holding a wide-eyed blue owl. Why blue, you ask? Because the owl’s name is Glauca, which means bright blue.

In the slot, the owl is very shiny and in the colour of gold. Probably because the gold fits the game better. The only symbols having any kind of movement are the owl, the olive tree and Athena. I think this was a smart choice, as too many moving parts would make the slot seem hectic.

I do have one complaint about the art, though. Because everything has been drawn in a highly detailed manner, it makes the game buttons a bit hard to make out at first.

The Golden Owl of Athena has absolutely beautiful music. As I opened the game the first thing I heard was the harmonic music with the sounds of an owl! I loved this detail, as I loved the background music in general. When not spinning, the music is soft and slow, and the non-verbal singing of a woman wraps it all together.

The standard value symbols are A, K, Q and J. The A and the K pay 15x your bet for five symbols on the same payline, and the Q and the J paying 10x your bet. The mid-value symbols, a helmet, a spear and a vase, are all of an equal value. Get five in a row and you win 75x your bet.

The high-value symbols include a temple and an olive tree. They pay 200x your bet. The highest value symbol is, of course, the goddess herself as she pays 500x your bet.

The owl of Athena works as a Wild, but also as a Scatter. On its own, it doesn’t pay any winnings, as it has to either substitute a winning symbol or appear at least three times as a Scatter. Three owls pay 2x your bet, four owls pay 20x your bet and five owls 200x your bet.

When working as a Scatter, the owl takes a wing and brings you 8 free spins for three owls. With four owls you get 12 spins, and with five owls it’s 20 spins.

The Golden Owl of Athena has five reels, three rows and only 10 paylines. The options for adjusting your bet are quite limited, so you can only choose one of the preset bets.

It’s a game of guess; choose heads or tails, and toss the coin. If you guessed the outcome correctly, you win and can try again. If the coin doesn’t show the result you hoped for, you lose everything from that spin. That is if you wagered all of it. You can bet only 50% of your winnings, so if the guess was wrong, you don’t get to leave empty-handed.

You have the option to buy the feature for a lump sum! If you select the Buy feature button and pay the price, you’ll get 20 free spins at once. The cost of the feature scales with the bet you’re currently using, so if the price feels too steep, try adjusting the bet size.

For activating the free spins you need three or more symbols of the golden owls. They can land on any reel and any place, but they need to appear during the same spin. Depending on how many owls you manage to collect, you shall receive 8, 12 or 20 free spins. Before the free spins start the game randomly selects the special bonus symbol. The free spins can also be re-triggered during the feature.

The free spins bonus symbol is a randomly picked symbol that expands on the reel if it’s a part of a winning combination. During the free spins, the winnings are paid as scatter wins, so the symbols do not need to be in adjacent reels.

While playing the game, I didn’t experience any glitches and everything ran quite smoothly. The speed of spinning the reels was a tad too slow for me, but the behind the game settings I found the option for Turbo Play. This really gave the reels the boost they needed!

I was also pleasantly surprised by how easy it felt to activate the free spins. Usually, if you have the chance to buy the feature, the game gets noticeably stingier with the free spins.

I usually play on my PC, so spinning the reels using the Space is more comfortable than clicking the mouse. Many modern-day slots offer this option, but I didn’t find it in The Golden Owl of Athena, which was a bit frustrating but tolerable.

The Golden Owl of Athena is a very beautiful slot, and I very much enjoyed the music. Under the pretty art and divine melody is a solid game, which keeps you easily entertained.

But, as nice-looking and fun it is, The Golden Owl of Athena is a medium volatile game with the RTP of 95.05%. It’s not bad per se, and by all means, if you are interested in this slot, try it! But, if you desire a better RTP and higher volatility, I’d recommend tagging along with Rich Wilde in his slot Book of Dead.

Play The Golden Owl Of Athena for free

Browse casinos with The Golden Owl Of Athena and other slots from Betsoft. Create an account and try the game for free before making a deposit.

You can play The Golden Owl Of Athena in English, Finnish, Swedish, German and 22 other languages. 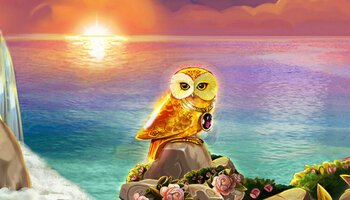